1 Once a Rusty Barn Find, This 1951 Chevy Bel Air Is Now Living the Ratty Gasser Life

Chevrolet Tahoe was the leader of the full-size SUV segment in the U.S., and GM tried to keep-it in the leading position by introducing its third generation in 2007.

Chevrolet Tahoe and his siblings GMC Yukon and Cadillac Escalade were built on the same platform as the Silverado pickup truck. The refreshed lineup included heavily modified exterior and interior design and smarter powertrains, which placed the big SUV on top of its segment, above Ford Expedition or Toyota Sequoia.

The designers had to broke a sweat to make that prominent front fascia look keen with the cross-section where the Chevrolet badge was placed. For the third generation, they changed the headlights concept from the two rows of lamps into one big headlight. On the hood, the carmaker placed two power-bulges to emphasize the V8 engine under the hood.

With the proper trim level, the Tahoe's interior could have been mistaken with a premium vehicle. GM offered-it with cloth upholstery for the cheaper versions, but on the other side of the scale, the customers could find leather-wrapped seats, wood-trims on the dash and door panels, power-operated second-row seats, and a touch-screen navigation system. A folding TV screen was mounted on the rear seat passengers' ceiling to make the roads more comfortable. The last row could have been removed in the seven-seat configuration and left behind if a larger trunk was needed.

The Tahoe featured the best-in-class fuel economy due to its cylinder deactivation system. Despite the fact that a 6.0-liter V8 powered its hybrid version, the Tahoe could get a 10.2 l/100 km (23 mpg-US) on the highway. 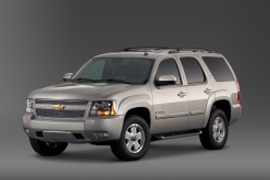