Chevrolet impressed the audience with the Corvette concept car shown at the 1953 Motorama event held at Waldorf-Astoria and decided to produce the roadster.

Those who rushed in buying the Corvettes in 1953 and 1954 were not happy with the car's performance, and GM pushed the engineering department to deliver a better car, which appeared in 1955 as the Corvette C1. It was finally the desired car with the right look and a punchy V-8 under the hood; it was the C1.

Chevrolet tried to sell the car as a sport vehicle, ready to take on the Mercedes-Benz SL300 and master the market of personal coupes. Stylewise, GM made a mistake by adding the "rocket-type" turn signals in the back, but the front side was good. It featured round headlights and a broad grille that spread lower than the headlamps. A fangs-type bumper with chromed elements increased the car's aggressive look. A hard-top with rear side and back windows was on the options list for the winter season. The fiberglass bodywork was new territory for GM.

Inside, the C1 offered room for two and a low-profile windshield. Considering the average height of the people in the '50s, it was barely adequate for them, and the same went with the rest of the interior. Apart from the big steering wheel that almost touched the door panel, the rest of the switches were small. Even the gear-stick was small. When retracted, a fiberglass panel covered the canvas-roof, which led to a purebred roadster's image.

Until the second generation, the Corvette featured an axle suspension in the rear, which was unpleasant. GM produced only 700 units per year to keep the car's price high, and they were all sold very fast. The most legendary American sports car was born. 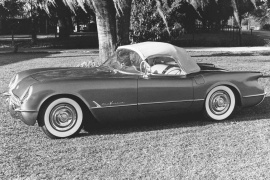