GM took its gloves off and launched the Camaro ZL1 as a supercar beater; it was the big brawler that went on the street, picked up a fight with a Teutonic knight, and crushed him in four seconds or less.

While the retro-design conquered American car buyers' hearts and money, the memories about forgotten muscle-cars started to be heard again. This time, the modern muscle-cars are not afraid about cornering speed, and they don't share their rear suspension with a delivery van. And, perhaps, most importantly, they don't look like they were designed during lunch breaks.

The Camaro ZL1 was a special version of the well-known American coupe. At the front, it showed a bumper design like it was smiling, but it was a grin. Its narrow grille above the bumper was extended on the lower apron with a broad one where the ZL1 badge stood small in the upper left corner. From its sides, the Camaro ZL1 showed the same sculptured door panels and enlarged fenders and rear quarter panels, but in the back, there was a new wing on the trunk and four chromed exhausts under the bumper.

Inside, the sport bucket-seats upholstered in suede and contrast stitching were a promise for excellent side support. Cudos to the carmaker who took about the same consideration for the rear bench, albeit it could use some headrests.

The real transformation was under the bodywork. The ZL1 featured a supercharged V-8 that sent 650 hp to the rear wheels through a six-speed manual or, as an option, a ten-speed automatic. Its independent suspension and Brembo brakes transformed it into a track-ready car that could shake an Italian supercar's serenity. This time it wasn't all about a quarter-mile run. Its sibling, the ZL1 LE, lapped the Nurburgring track in 7m16s04," making it the fastest Camaro ever. 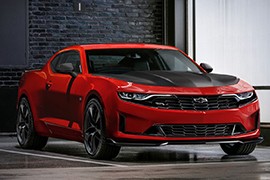