By 1974 the oil crisis and the insurance premium cut through the muscle-car customers, and the carmakers had to adapt.

The Z28 Camaro was one of the smartest ways to do it.

Chevrolet introduced the second generation of the Camaro in 1970. It changed its category from muscle car to pony car, competing mainly against the Mustang and the Dodge Challenger, the latter being discontinued in 1974. GM tried to keep its promise and produced the Camaro in the Z28 package, which offered the LT1 engine and a few unique features.

Chevrolet offered an option for stripes on the hood and trunk lid for starters, with broad Z28 lettering on it. The overall length increased by seven inches (178 mm) due to the larger bumpers, mandatory for the 5 mph (8 kph) rule. A unique set of alloy wheels and sport door mirrors enhanced the car's profile, while at the back, the Z28 sported dual exhausts. But the most significant improvement over its predecessor was the unibody construction of the F-body platform, which reduced the weight and improved the handling.

Inside, the carmaker installed sport bucket seats with integrated headrests. Its dashboard sported the same wide cluster extended over the instrument panel and the center stack. It still featured rear seats but with minimal legroom and headroom due to the sloped-down greenhouse.

Under the hood, Chevrolet installed a 5.7-liter V-8 engine (350- cu. in.). It was fed through a four-barrel carburetor and provided a 245 hp SAE net. It sent the power to the rear wheels via a four-speed manual gearbox with an option for a three-speed automatic (mainly for the LT version than the Z28 models) to a positronic rear differential (self-locking). 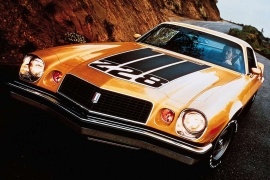