The 1997 Camaro SS was a bargain of its times when compared the price to the performances, and, unlike many American cars, it was good on handling as well.

The SS badge was notorious in the mid-'60s when Chevrolet installed it on its most powerful versions such as the Chevelle, the Camaro or the Nova. It didn't use it only as a marketing tool. Those vehicles were powerful and special. The 1997 Camaro SS was no exception. Chevrolet asked the SLP performance to do their magic on the Camaro Z28 and they did.

Chevrolet didn't want the Camaro SS to be subtle. It added a composite hood with a big air-intake on it and a small wing-spoiler in the back. In the rear, it added a dual stainless steel exhaust that improved both the car's look and sound. The SS needed a set of Corvette ZR1-inspired 17" light-alloy wheels fitted with fat tires to improve the car's handling.

Inside, there were not too many differences when compared to a regular Camaro Z28. Chevrolet kept the dual-color upholstery on the bucket-seat with high bolstering. A new, six-speed, manual gearbox fitted with a Hurst gear knob was fitted as standard. To emphasize the particular model, Chevrolet stuck a specific badge on the ashtray's lid, on the center console.

Under the hood, the LT4 engine from the Z28 version was tuned by SLP. They were the same team that brought more power to the Pontiac Firebird. Due to a tuned intake system, the 5.7-liter V8 provided 25 more hp than the standard Z28. Thanks to the new 6-speed manual and to an optional Torsen limited-slip differential, the SS was able to hit the quarter-mile in 14 seconds flat. 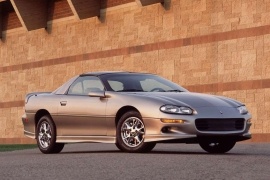