The sixth generation of the Chevrolet Camaro was introduced in May 2015 at Belle Isle Park in Detroit, but the sales started later that year.

It was introduced with three engine choices.

The Camaro has its place in the American motoring culture. For some, it is a cult-car with its roots going back to the muscle-car era. For some decades, its name faded away until 2010 when the fifth generation arrived and stirred the pony-car market.

From the outside, the 2016 Camaro resembled the 2010 model, with a retro-design look and narrower headlights. When compared to its predecessor, the sixth generation was shorter, narrower, and smaller than its predecessor. It was also 91 kg (200 lbs) lighter. It was offered as a coupe and convertible.

Inside, the Camaro retained the dual-binnacle-style instrument cluster. It featured analog dials and an option for an 8” center screen that could provide additional information including navigation, performance, and infotainment features. The center console and the center stack were driver-focused.

Under the hood, the Camaro was available with three engine choices, starting with a four-pot turbocharged unit, a V6, and the top-of-the-range LT1, V8. The suspension featured McPherson front struts for the front and a five-link system for the rear, with Magnetic Ride Control available for the SS version. The Brembo brakes were standard for the SS and offered as an option for the other two. 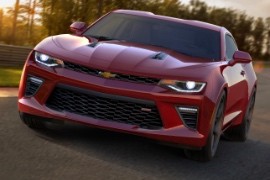