The iX M60 heralds a new era for M since it is the first vehicle designed and engineered by the BMW M automobile as a purely electric vehicle right from the start.

The M department started its journey half a century ago, and most of its products were based on regular BMW cars. It was just a matter of time until it started to improve the overall performances of the carmaker's crossovers, named SAV – or Sport Activity Vehicles. The well-known X5 was the first to receive such a treatment. But this time, it all began with a blank sheet of paper.

With all the evolution toward crossovers and SUVs on the market and the electric-car revolution started, it was just normal that BMW M would start making one. The iX M60 was unveiled at the beginning of 2022 and offered the highest torque available for an M-powered vehicle in history.

The design kept the same controversial front fascia with the vertical kidney-grille in the middle. Its length was comparable to an X5 and the width to an X7, while the height was lower than any of them. Its roofline resembled the X6, but it was not that much sloped as on its sibling. Despite its massive appearance, the car was actually light thanks to the extensive use of CFRP (Carbon Fiber Reinforced Plastic) integrated into the safety cell, roof, and pillars.

Inside, thanks to the lack of transmission tunnel, the carmaker was able to create more legroom and add more storage areas. Its seats were multicontour, designed for comfort, but also with high bolstered areas for increased support during high-speed cornering. Like other BMWs from its time, it sported the BMW Operating System 8 for the iDrive. A wide and curved display sat on the dashboard, as a floating glass panel, integrating the instrument cluster and the touch-screen for the infotainment unit. 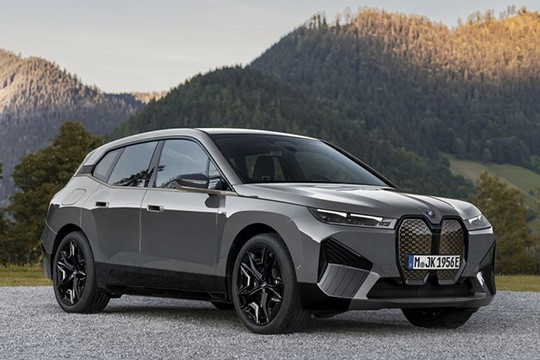