BMW introduced a new generation of the 3 Series in 1982.

It was an important step forward compared to its predecessor, especially since it also came in the highly-demanded four-door shape.

The first generation of the 3 Series was a blast to drive for those times. It was a sports coupe vehicle that charmed close to 1.4-million customers worldwide, and it could have been even more successful if it had a four-door version. However, that problem was fixed with the introduction of the 3 Series' second generation, the famous E30.

One of the most coveted features of the first-generation 3 Series was the quad-headlights design, and the carmaker decided to make it standard on the entire range. Its black grille with horizontal slats and the kidney grille that adorned the center of the front fascia were easy to recognize. It was an advanced design for its time, with body-colored bumpers adorned by black rubber strips to protect it from small scratches. The chromed trims around the windows were specific for the pre-facelifted model, which appeared in 1987. Even though it sported a four-door bodywork, the sedan shared the same wheelbase as its coupe sibling.

Inside, the dashboard featured a driver-oriented center stack, with the HVAC controls placed under the stereo. Worth mentioning that not all versions came fitted with an AC unit. Also, not all versions featured a tachometer. BMW installed bucket seats for the front passengers and a center console that subtly divided the driving area from the rest of the car. At the back, the carmaker placed a bench for three, although the one seated in the middle had to share their legroom with the transmission tunnel.

Under the hood, BMW placed a wide engine range, sending their power to the rear wheels via a manual or an automatic transmission. 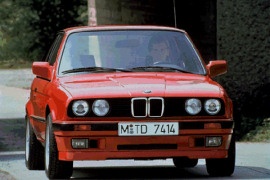