Audi made a name for itself for its high-performance turbodiesel engines.

It used them to conquer the LeMans race and proved them worthy on many street vehicles.

For the 2021 model-year, the German carmaker offered the Q5 with a diesel-fueled engine that could blast to 100 kph (62 mph) in just 5.1 seconds and named it SQ5 Sportback. A 4-door SUV coupe ready to hit the roads with the same confidence as the hottest hot-hatch available to its release time, in late 2020.

The SQ5 Sportback featured a sloped roof and rear window. Its shape was closer to the Porsche Cayenne Coupe than to the Audi A5 Sportback, but since both brands are in the same boat, nobody complained about that. Unlike its non-S sibling, the SQ5 Sportback featured a bigger singleframe grille at the front and silver accents on the lower splitter and side-scoops. Audi hid the exhausts under the bumper in the rear, and, thankfully, it didn't install fake chromed exhausts.

Inside, the clean lines were disrupted by the infotainment screen placed on top of the center stack on the dashboard. As usual, for the SQ trim levels, there were no analog dials on the instrument cluster. The Audi Virtual Cockpit TFT display replaced those. Audi installed two profiled seats on the bench in the back, but it could accommodate three occupants.

Audi SQ5 featured a lowered suspension for improved cornering speed and was fitted as standard with 20" light-alloy wheels. A set of 21" was available as an option. For the powertrain, the SQ5 featured a twin-turbo V6 diesel engine with the turbochargers installed between the cylinder banks. 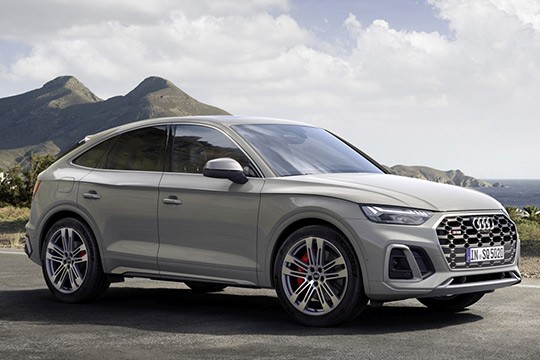