In 2016, Alfa Romeo introduced the last refresh for its smallest vehicle in the lineup, the MiTo, and upgraded the engine lineup to Euro6 emission standards.

While most hard-core Alfa Romeo fans didn't like the fact that the MiTo shared its underpinnings with the mundane Fiat Grande Punto or Opel Corsa, the carmaker actually made some profit with the little premium car.

After the successful introduction of the Giulia lineup, the carmaker tried to get a bigger market share with the less-expensive MiTo. The exterior went through some subtle changes that brought it nine colors and three trim levels. Moreover, there was a choice of eight light-alloy wheels to choose from, ranging between 16" and 18" in size. For the sports version, the MiTo featured a dual exhaust at the back, lowered stiffer suspension, and tinted rear windows. In addition, the headlights featured a carbon look and glossy black finish trims that matched the rear-view mirrors caps.

Inside, Alfa Romeo introduced a new UConnect with a 5" touchscreen placed on the center stack. It was neatly integrated without giving the impression that it was added after the initial 2008 project. Depending on the options, the carmaker added a pair of sport seats signed by Sabelt motorsports equipment provider, finished in Alcantara and with Alfa Romeo badges embroidered on the seatbacks. Still, the two-door bodywork and the limited room in the back made the car more of an urban challenger than a true hot-hatch.

Under the hood, Alfa Romeo introduced new, Euro6 engines ranging between 78hp and 140 hp. An electronically-controlled limited-slip differential was on the options list. 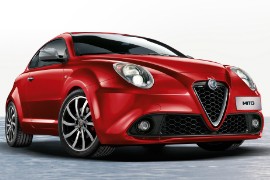 3 Alfa Romeo F1 Races With a New Livery, Fans Are Split About It