Porsche is like an exotic animal breeding institution. The same Zuffenhausen laboratory that gives us the 2015 Cayman GTS is the birthplace of so many other superbly athletic creatures, but there’s always a risk when you’re playing with DNA: cannibalization.
Ever since the Cayman showed up two generations ago, Porsche strived to keep the more balanced mid-engined machine from getting in the way of the flavored 911, their backbone. Less horsepower, delaying the introduction of a limited-slip diff, these were all measures aimed at preventing the valuable genes in each model line from competing against each other.

Well, you can scrap all that, the Cayman GTS is so damn good that it’s been keeping me awake at night, digging at the foundation of the 911 pedestal.

Then again, you expect that to happen when Porsche finally installs the GTS badge on their mid-engined models after such a long wait. Sure, the Cayman and the Boxster have only been around for a decade or two, respectively, but the carmaker came up with the GTS in 1963.

Back then, the 904 Carrera GTS was a track animal also allowed to drive on public roads and this is what the badge stands for today - a car that feels just as good on the track as it does during your daily commute. In fact, Porsche has been so reluctant to offer the Cayman/Boxster in GTS trim that they introduced it on the Panamera and Cayenne first.

So what does Gran Turismo Sport stand for in this case? Compared to the Cayman S, power goes from 325 to 340 hp, while the body kit is a notch more aggressive. From this point on, the GTS is basically a shortcut for Porsche’s optional extras maze, offering you better value.

In the typical Porsche fashion, such a collection of small details can make a serious difference compared to the Cayman S we drove a while ago. Perhaps I wasn’t fully convinced about it before climbing aboard, but I am now and we’ll be going through the details together.


Now that the third generation has finally moved the Cayman into a fully masculine styling zone, you can think of the visual treats of the GTS as those colored socks only a mature character knows how to wear.

The front apron has air intakes that are more determined to let the upgraded engine breathe. The nose job also makes the car 30 mm longer. As for the headlights, these offer Porsche’s PDLS dynamic light system with black inner graphics as standard.

The rear bumper comes with a diffuser that lets you know this car isn’t shy around the track. The taillights are tinted to match the front light units, while black is also used for the tailpipes.

Speaking of which, the GTS not only offers the sports exhaust system by default, but also features custom tweaking. In the real world, this means you can recognize this Cayman version by its exhaust. The entire repertoire is a bit sharper, while a few pops appear when you step off the gas. It's tastefully restrained by some standards, but I think it suits the car just fine.

The same can be said about the cabin, which brings the Alcantara treatment GTS models have accustomed us with. I’m especially fond of the material being used on the steering wheel. There are two main benefits here. The first is obviously the nice tactile sensation you get while pushing the car hard on a B-road.

Then there are the times when you simply grab the wheel to make an easier exit - you’ll enjoy the extra grip. Since I mentioned this, I have to explain that access is the only part of the Cayman GTS that’s not entirely suitable for everyday driving. The rest of the car is totally fine with the challenges a daily driver has to meet.

You can choose between two shades of contrasting stitching, the extrovert Carmine Red and the more discrete Rhodium Silver. And since nowadays even a Renault Clio RS has colored seatbelts, the ones in here come in a two-tone color scheme.

As mentioned in the intro, buying a GTS means you’ll get plenty of standard features that Cayman S customers have to pay for. Stuff like the Sport Design wheel (yes, the paddle shifter one) and Sport Seats.

The seats are still a bit on the tight side, especially in terms of the rib area bolstering, but the Alcantara makes them softer, so you’ll get over this issue after a while.

While not being reserved to the GTS, the good visibility of the Cayman is a treat you’ll appreciate inside the city. The same can be said about the pair of luggage compartment, which add up to offer a total capacity of 15 cubic feet (425 liters).

The Cayman GTS can easily handle urban traffic. As opposed to a Corvette, for instance, you can feel its track genes even at slow speeds and I’m referring to the weight of the steering here.

And while at 4.4 meters in length this is no supermini, the compact size of the Cayman and its agility join forces to serve you well. The standard PASM suspension, which is 10mm lower for the GTS, even manages to deal with speed bumps without too much hassle.

Driving the Cayman GTS inside the city feels a bit like stretching before a training session - once you hit the open road, you’ll be both prepared and relaxed at the same time.

Linear, this is the world that perfectly describes the machine. It applies to the 3.4-liter straight six or the handling of the car just as well.

We just had to include a track stint in our drive, but the best part of the experience is that we had just as much fun getting there. Where a 911 takes itself seriously, the Cayman GTS is always light, delivering performance casually.

Knowing the track experience would start with me switching places with my passenger, a fellow editor, I had to pay close attention to his reactions along the way. Last time I failed to do that, I had to face a hefty revenge when we reached the circuit.

This won’t happen with the Cayman GTS though. Not for one moment did he complain about the experience in the passenger’s seat. The only moments when the GTS badge put a bit of strain on him took place around 2,000 rpm.

That’s where the exhaust sounds a little loud for a road trip in standard mode. A quick chat about how the extra output was achieved solved everything though. 15 hp and 10 Nm (7.4 lb-ft) might not seem like all that much, but, compared to the Cayman S, the 3.4-liter unit at the middle of the car seems a bit livelier altogether.

To achieve this, the German engineers played with stuff like variable control for the intake camshaft, or VarioCam Plus in Porsche language. As mentioned above, the engine is linear, but you do feel even more effervescence arriving from just under 5,000 revs.

Since this isn’t one of Porsche’s GT division cars, the optional PDK never really blows your head off your shoulders, which means you can use the Cayman GTS for a trip even when the destination is one day of driving away. We didn’t get to drive the manual though.

The chassis setup seems a bit more playful than what you get in the Cayman S, even though we didn’t drive the two back to back.


And when you’re out there on the circuit, this Cayman remains just as relaxed as it was inside the city.


There’s no understeer and, once you take things past 8 out of 10, you’ll dip into the sublime Porsche balance.

We’ve gotten over the missing-the-hydraulic-steering stuff, as the setup offered here is among the best on the market.

The Cayman GTS’ handling setup is simply textbook material. As you approach the limits of grip, the car subtly lets you know about it. Once the rear end lets go, the sideways transition happens smoothly, almost as if the car had all-wheel drive to assist you with the slip angle moves.

During the sideways stuff though, we did feel the lack of the limited-slip differential. This, together with the moderate wheelbase and the natural Porsche tendency mentioned above, means the Cayman isn’t the kind that like to drift all that much.

That diff is available as an option, part of the Porsche Torque Vectoring system, which brakes the inner rear wheel through the bends.

The Cayman GTS is stable at triple-digit speeds, even when the asphalt underneath isn’t perfectly smooth. As for when you have to break, the standard steel stoppers offer impressive power and fading resistance.

Our track time took place on the Adancata Motorpark Romania circuit. This meant we had 2 miles (3.3 kilometers) of both casual and seriously techical corners, as well as a straight line that takes things into the triple-digit velocity area. Last time we visited the place, we were running from one corner to another in a Lamborghini Huracan. Let me just say the Cayman GTS experience felt better.

How could it not be so, when this is a car that manages to be uber-precise and entirely forgiving at the same time? Last time we noticed a car juggling assets in a way that seems almost paradoxical, we were marveling at the utterly lavish simplicity of a Rolls-Royce dashboard.

The Cayman GTS is a very good teacher, since lapping the track time and time again, its consistence allowed to spot my flaws and work on them.

It’s only after you get to drive the hell out of a Cayman GTS that you realize this mid-engined coupe and the 911 will never fully overlap, no matter how much power the Cayman receives.

The 911, despite its heavier feel, remains unique - once you get to master that rear-engined pendulum effect, the smell of danger in the air is what makes the Neunelfer so special in the car world.


The Cayman, on the other hand, has such an elegant behavior it should be called the Porsche Gentleman.


Have you decided to change things in the middle of the corner? No problem, we can arrange something to be done without having you thrown off balance.

Still, if you want one, you’d better be well-balanced yourself and we mean this in a financial way. It might offer better value than a heavily loaded S, but its MSRP starts at $75,200, not including destination charges. While this makes the GTS about $11,000 more expensive than a Cayman S, you should expect a medium-loaded model to sit north of $100,000.

The one-hundred-grand story is largely similar in Europe, where the Cayman GTS starts at EUR73,757 including 19 percent VAT on the German market.

Basically, this is Porsche saying “We know what you really want is a specced-up S model, so let us give you a GTS and create a win-win situation”.

I was expecting to drive the GTS and come to a conclusion like “yes, this is nice, but it’s the bonkers GT4 I really want”. Well, while I’m still curious as hell about the 911-engined and 911-suspensioned, track-savvy Cayman, the GTS makes me more than happy.

The turbo era is coming at Porsche and it will most likely be followed by the hybrid age. Thus, the Cayman GTS will remain in history as the overly analogue modern era car that it is.

The world of sportscars has many types of offerings. From the basic Toyota GT86 and the numb Nissan 370Z, to climax cars that only offer full pleasure at the top, such as the Corvette.

Well, the trick with the Cayman GTS is that the enjoyment arrives from start to finish. Just like you’d expect from a carmaker who’s spent more time on the track than any other in the world.
88user rating 80 votes
Rate this car! 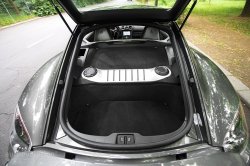 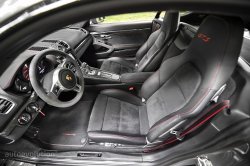