Some say the Porsche Macan is a crossover. Others claim it’s a sportscar. We wouldn’t include it in either of the categories, though. Instead, we’ll label the Macan a time machine.

No, Porsche’s Macan does not take you into the future, but it has arrived at precisely the right time. First of all, if there is something we have learned from all the niches invented over the last decade or so, it’s that we need to keep an open mind. Who wouldn’t want an automobile that drives a bit like a 911 but defies harsh conditions like a Cayenne?

Secondly, this is the perfect time for Porsche to launch such a car. People have finally stopped complaining about the Porsche badge placed on vehicles with four doors and many have come to realize the benefits a crossover brings over other types of cars.

When building the Macan, Porsche started off with the Audi Q5 platform, but let’s not allow ourselves to be fooled here. The two cars won’t be too similar. Porsche used a similar scheme for the Cayenne, which borrows the Volkswagen Touareg’s underpinnings and yet the two are entirely different animals.


Numbers alone are enough to clarify this - about 70 percent of the Macan parts are either new or reworked.


We set out to test this with the help of a Macan S.

Porsche designers are never going to be happy about straying too far from the classic 911 shape so they pulled a few stunts to bring the Macan in line with the rear-engined coupe.

The Macan may not have a powerplant at the back, but the aluminum hatch and rear fenders are designed to bring a strong focus on this area. The roof’s slope is gentle and allows the cabin to offer decent headroom. The rear end is gifted with a set of taillights inspired from those of the 918 Spyder. Beautiful.

The Macan comes with a generous ground clearance and, to conceal some of the resulting height, its sides were adorned with longitudinal trim elements. VW Group designers are no strangers to such large add-on visual elements - the Audi R8’s vertical blades are an example as good as any.

Up front, we find an aluminum hood wrapped around the headlights and all the way to the generous front grille. Active shutter grille, to be more precise.

Since the Macan line-up consists solely of turbocharged engines, you will not be able to tell an S from a Turbo judging by its side grilles, as in the case of the Cayenne, where the naturally-aspirated models come with blocked off side air intakes.

By the way, if you open the bonnet, you’ll notice Porsche engineers like bracing. So do we.

The result of all this work is a Macan with a muscular stance, something to let you know this is no average crossover. This is a CUV that does not joke with aerodynamics. OK, it does not generate downforce, but a 0.01 lift value at the rear axle is the only compromise it makes for streamlining.

This overall profile of the Porsche Macan makes you marvel each time you step outside - as you exit, you find yourself higher than you were expecting while being inside. Speaking of the cabin, if you’ve been inside a contemporary Porsche recently, you’ll feel at home in here.

Last time we checked, the industry did not hold any world ergonomics awards. If it ever does, Porsche should receive the grand prize. We love the one-task-one-button layout that allows you to instantly and perfectly connect with the car’s functions.

Reporting from the driver’s seat, we notice the surprisingly low position, something to bring you into the right mood.


The atmosphere in the Macan is a healthy mix between the 911’s cocoon and the space you have in the Cayenne.


Imitating the actual small Porsches, such as the Cayman, the Macan ditches the usual five-instrument dashboard, leaving us with three dials.

This is not the only element the Macan borrows from Porsche’s sportscars. The steering wheel is also on the list, inspired from that of the 918 Spyder, with both control buttons and ergonomic shift paddles. As most of you already know, the rest of Porsche’s current models force you to choose between a multifunction steering wheel and a paddle-gifted one.

Looking past the aforementioned details, we find plenty of room up front and good visibility. The rear visibility is an exception, but this is the case with most of the fancy cars nowadays. We head for the back seats and find a decent amount of space. Two adults can travel comfortably in here even on long journeys.

Engineering hasn’t reached that point where it actually rivals magic, so the sexy back of the Macan did require a small compromise - while the Audi Q5 offers 19 cubic feet (540 liters) of luggage capacity, the Porsche drops to 17.7 (500 liters).

The atmosphere in here is definitely premium and yet we wouldn’t mind if Porsche came up with an update for its interior design language. Something to make their cabins look cutting-edge.

Until that happens, we’re tackling the city in our Macan S tester and it feels just right. In fact, we could probably use these two words for just about everything the Macan does around town.

For one thing, the size of the vehicle is well balanced. There is enough car around you to bring the feeling of protection and you can glide the Macan through urban traffic. Did we say gliding? We meant coasting. The seven-speed PDK double clutch gearbox, standard across the range, offers this function.

Speaking of the powertrain, it feels relaxed in most conditions. This is a Porsche that allows you to mix the “Sport” button, also standard, with city driving.

“Everybody drives huge SUVs / crossovers in the city. Ridiculous” - this is one myth the Porsche Macan destroys. The only part of it that can’t be dismissed outright targets the fuel efficiency. We recorded 14.7 mpg (16 l/100 km) during the urban side of our drive.

The cool part is you don’t actually feel all that weight while driving. The road behind us twists in a way that makes the rear view mirror looks like Dali’s work and the Macan has a smile on its face, so the Porsche agility is definitely here. You can kick the throttle mid-corner and the car is happy to oblige. The chronograph adorning the dash is our witness.


The throttle mapping and the PDK transmission have been tuned to deliver the Porsche-type immediate response.


Once you’re done driving the kids to school, give this thing a good whipping, it likes it.

Let’s not get carried away though, the Macan S can only partially outrun its power to weight ratio. Once that initial thrill passes, the car settles in for what is a warm acceleration pace. You’ll need the Turbo for the obscene stuff. Time to talk engines then.

Take the Panamera’s V8, slice off two cylinders, play with the balancing shafts and you’ll be left with the Macan’s heart. “Which Macan?” we hear you asking. Well, both the S and the Turbo use twin-turbo V6 units. The first has a three-liter displacement, while the Turbo adds 0.6-liter to that. The S delivers 14.5 psi of boost while the Turbo takes that to 17.4 psi.

Europeans also receive the Cayenne Diesel’s V6, massaged to deliver 258 hp between 4,000 and 4,250 rpm and 428 lb-ft (580 Nm) between 1,750 and 2,500 rpm. We only spent a short while inside a Macan S and we weren't dissapointed. Judging by the sound, you could swear this is not an oil burner and the driving dynamics are respectable.

Sir May B. Bach

Not so much of a vehicle, what we have here is actually a social experiment.

Upon being informed by Porsche that it would launch the Macan, I had a special entertainment room built for this purpose. At least once a week, I spend an evening there, contemplating the manner in which people all around the world trap themselves in what they call... ahem... car segments.

Americans have their size-related classes, while Europeans prefer to use the alphabet, ending up with ridiculous designations. I can not help but marvel at how the industry forces consumers to know a certain vehicle belongs to the “B” segment, for instance.

Not one inch of consideration. This is what the Macan holds for such practices. I find it amusing how these Germans managed to cross the border between breeds. Obviously, nobody wants to admit the Macan demonstrates how silly vehicle classification is, but they all agree on one matter - this Porsche is a good effort.

Alas, there is nothing all that spectacular hidden within the confinements of this Porsche, nothing that would make me contemplate acquisition. What Porsche has brought here is proficiency for the masses. The... ahem... wealthy masses.

I certainly afford and deserve something a tad more on the bespoke side.

I’ve always adored tigers, in fact I’m a feline myself.

When I first heard I was going to drive a tiger, I got all enthusiastic. I put on my best adventure attire, with the leather pants and the practical set of heels. Animal print, of course.

However, as I reached the actual car, it was a disappointment. I mean it doesn’t look bad, but is this the Tiger that was supposed to make me scream? It makes me laugh.

Oh, wait, I spoke to soon, the rear end is a different story altogether. Oh, I have to admit, those sexy headlights made me a bit curious. OK, let’s climb aboard. Hmm... are you sure this is a new car? It looks just like all the other Porsches I’ve driven in the past. Whatever, we have to get started.

Um, oh, I was a bit upset so yes, I did try to find faults but, to my amazement, I couldn’t. The Macan is definitely the kind of guy that makes good husband material. He is definitely strong. Oh yes, I can feel it. Sometimes it’s almost like I’m hanging out with the 911 playboy.

But, unlike the playboy, the Macan is a guy you can rely on. He’ll always be there for you. And everywhere you go, he’ll show major support. Even when you are angry, like I was. Oh, but I still long for the butterflies I had in my stomach when driving the 911...

Why should I buy this smaller Porsche that’s offered for Cayenne money?

This is an SUV anyway, so nobody can talk about actual driving pleasure. Get real people, it’s all about the image here. On second thought, the best plan would be to actually get one of these Macans now, so that people would see me driving the latest Porsche.

Then, after I’m done driving it all around the city day and night - a few weeks should be enough - I could trade it for a Cayenne. You know I have so much experience in the car business, I’ll talk a salesman into eating his own shoes.

There would be one problem though. The Macan Diesel feels so much sportier than the Cayenne Diesel, but I can’t get an oil burner. Unless I could get a hold of some “Turbo” badges and do something about that exhaust note. The thing is that no tuner has started working on the Macan yet, so I’ll have to wait. But then I won’t be among the first to drive a Macan. Screw this, I’ll just take the tester up and down the boulevards and call it a day.

This thing seems to fly when I’m hammering it. Oh yes, this is the Porsche power. I don’t know if I’ve ever told you this before, but I really like Porsches. Yes, they remind me of my Bimmers so much.

There’s one problem though: the driving position. I’m in an SUV, I want to sit high, you know? Well, in this here Macan, it all feels like I’m in a sportscar or something. That’s not all bad, but it doesn’t make me superior and this is definitely a deal breaker. Nice car though. 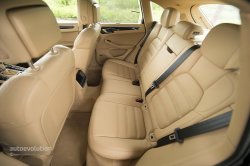 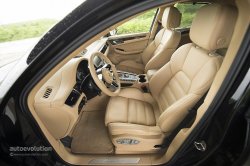 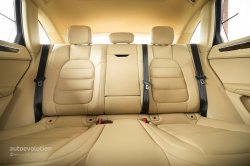 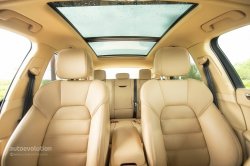 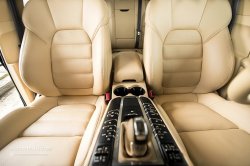 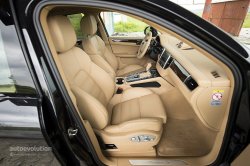 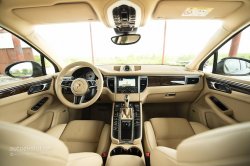 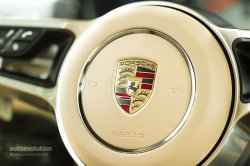