The Go
The Porsche Cayenne GTS steps up the S model's dynamic and feeling game, but, apart from the financial premium, this doesn't come with a price. In other words, you don't lose any of the drivability, comfort or offroad capacity included in the Cayenne S package.

You start to feel the force of the tweaked naturally-aspirated 4.8-liter V8 from 2,000 rpm. As you get closer to 3,000 rpm, the unit keeps its linear power delivery, but the crisp torque arrival may trick you into believing you're using a forced induction powerplant.

Maybe the most important part of the new experience is brought by the audible side of this story. The Cayenne GTS almost sounds like a supercar when you're hammering it, both in terms of volume and repertoire.

Some may argue that while the engine tweaks that led to the more profound sound are welcome, the sound symposer fitted to the car just brings fake engine noise. However, it's actually extremely pleasing to have some extra sound generated by the powerplant, not the exhaust. If you place you head in a transverse position, you'll notice that you receive a stereo experience, with the sound coming from both the exhaust and the engine compartment. In case you were wondering, you can use the new-found voice of the V8 to sing via the throttle pedal.

Porsche has also tweaked the ECU to allow infinitesimal amounts of unburned petrol to reach the exhaust manifold during downshifts. The ignition in some of the cylinders is briefly suppressed and once the fuel reaches the exhaust it burns producing a pleasant, but only barely audible rumble.

The only complain is the fact that the butterfly exhaust valves are only naughty enough in the “Sport” mode.

Another element of the car that will fascinate the driver is the steering, which shows a phenomenal level of adaptability. It manages to provide enough feeling and consistency during high speed driving on the road and can become extremely light during oversteering offroad moments, allowing you to bring the car back on track swiftly.

As far as handling is concerned, the only difference between the Cayenne GTS and the S lies in the suspension setup - we are talking about a slightly stiffer setup and a 20 mm lowering of the ground clearance. This brings the center of a gravity lower and makes the car feel even less of an SUV and more of a sports car during high speed cornering.

Once you've turned the Porsche Stability Management (PSM) off, you'll notice that, on dry tarmac, the rear end doesn't rush to step out. However, we can't use the word "understeer" either, at least not alone. The handling is pretty close to neutral and there are only slight traces of understeer. Rear end drama fans shouldn't worry, the Cayenne GTS will powerslide if you dare it to. As for the low grip driving situations, these will show you that the SUV has bewildering drifting abilities.

This car has far too much dynamic potential for one not to gift it with all the optional technical features available. You simple have to go for the Porsche Dynamic Chassis Control (PDCC) active stabilizer bars, which demolish body roll and can be deactivated during offroad driving. There’s also Porsche Torque Vectoring Plus (PTV Plus). This brakes the inside rear wheel during certain high speed cornering conditions and also includes an electronically-controlled rear locking differential.

Driving the Porsche Cayenne with or without the PTV Plus makes a whole lot of a difference - when you’re pushing the car hard, the steering effect is seriously amplified by the aforementioned braking while the rear diff helps you bring the car back on track much easier.

The extra sporting appeal brought by the GTS moniker hasn't altered the Cayenne's off-road abilities. Yes, the ground clearance is now 20 mm (inches) less imposing, but that's the only drawback. Even so, you can use the air suspension to raise the car, so you'll have no problems tackling the roughest of terrains, if that's what you want.

The GTS keeps the Cayenne S' offroad mode, which, apart from increasing the ride height, also does other things. For example, it disconnects the two halves of the active stabilizer bars and can also activate the locking center and rear differentials. The Cayenne simply makes offroad driving feel like a computer game.

The GTS treatment received by the Cayenne doesn’t affect the excellent drivability of this Porsche, so you can still enjoy the tons of comfort it provides when the driver demands this.

Long trips in the Cayenne GTS will be a pleasure, with the excellent soundproofing and the 1,800 rpm gearshifts fighting for the title of “best coziness provider”.

As for the fuel consumption, Porsche indicates that the average figure has increased by only 0.2 liters per 100 km compared to the Cayenne S. The GTS comes with an EPA rating of 17 mpg, while Europeans will tell you that it averages 10.7 l/100 km. During our test drive, the SUV returned an efficiency of 16 l/100 km (14.7 mpg).

The modifications also leave the in-city driving abilities of the Cayenne untouched, so, aside from the high driving position, it’s not too difficult to forget all about the exterior dimensions of the car.

Regardless of the driving environment, the changes brought for the Cayenne GTS work together to make the car shrink around you even more than the Cayenne S.
Next page
1234
78user rating 37 votes
Rate this car! 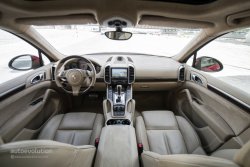 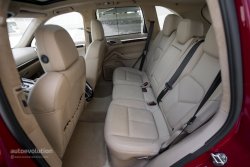