3 Star Wars Landspeeder is the Best Cat Bed Ever

4 Opel Stuffs Many Adorable Kittens into a Car: Corsa Ad!

Your Cat Will Want one of These Car-Shaped Cribs

Home > News > U-turn
Ionut Ungureanu
When we saw Deadmau5 petting his cat in a Lamborghini Murcielago electric car, there were two questions that we instantly asked. The first will not be replicated here due to foul language rules. The second question, however, was whether or not there is an industry behind these cat cribs shaped like cars. It turns out there is something going on.
12 photos

Hey, we just realized there’s an irony here. "Deadmau5" stands for "dead mouse". So here’s what we get out of it: the dead mouse has a cat that he pets in a Lamborghini he wants, but only the cat gets. And we're serious about it, Joel Zimmerman wants a Huracan, but he didn't get it so far.

Nevertheless, excuse our little random fact and let’s move on to the cat factor. As we said, there’s a growing industry that involves cars and kittens. Here we have famous electronic music DJs shopping for toy supercars for their pets to sleep in, there we see a cat lover building Star Wars landspeeder-shaped cribs.

Then you hear Opel is using a millionaire cat (literally) owned by a renown fashion designer who was probably in a big lack of ideas for his partnership with the German carmaker. What does Chanel Creative Director Karl LAgerfield do? He used his own pet for the 2015 Opel Corsa calendar.

Like all this cat madness was not enough already, we stumble upon a company in the UK that makes these cribs for man’s best feline friend out of folded carboards. Sure, it’s not just car shapes they are using, but anything from tanks, firefighters trucks, jet fighters, and so on.

Whether you like the plane, tank or “Catillac” more, each set will cost you £20 ($30.5). And don’t you worry about the environment either since the company making them claims all paper and card materials used in their products are partially or wholly recycled.

It could be a coincidence, but mankind could also be facing the dawn of cats taking over the ruling of dogs. 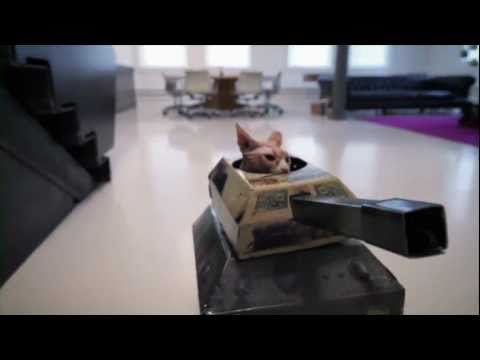