4 The Silverstone Wing Under Construction
Car video reviews:
Up Next

It’s a significant and certainly nostalgic moment, when a historical military building is wiped out from the face of the Earth, after decades of service. Things continue to move faster than ever, so an old building like the Military Ocean Terminal at Bayonne had to make way for something new. Still, it will always be remembered.
7 photos

On Sunday, August 8, residents of Bayonne, New Jersey, could hear the unmistakable sound of an implosion, early in the morning. The officials had established an exclusion zone around the implosion site, since Wednesday, for safety reasons. On Sunday morning, the ones that were curious were able to watch the actual implosion from a nearby walkway, along the Bayonne Golf Club.

The Military Ocean Terminal at Bayonne, known as MOTBY or the MOT, was comprised of two structures, each around 1.5 million square feet and 6-story high. During World War II, the U.S. Navy took over Bayonne’s shipping port terminal that had been built in 1932, to provide extra industrial space for the urban community.

Later on, in 1967, the U.S. Army began using it as a base. New Jersey Future reports that, at its peak, MOTBY handled million tons of cargo per year, and employed 3,000 people, including civilians and military personnel. However, after the end of the Cold War, a federal decision was made to close down MOTBY, which was completely shut down by 1999.

Besides its roots dating back to before the WWII, another interesting thing about MOTBY is that it was actually built to withstand a bomb blast – which makes it even more ironic that this is exactly how it would come to an end, all these decades later. According to nj.com, the historic facility first had to be stripped down, and the bomb-proof panels removed, before the implosion. A smokestack and a steel water tower, at the site, were also imploded a few years ago.

What was the reason behind this final blast? Renamed the Peninsula at Bayonne Harbor, this location was determined to be the perfect spot for a future mixed-use complex, due to begin construction by the end of the year. Bayonne said goodbye to a WWII symbol, but it will be kept in everyone’s memory. 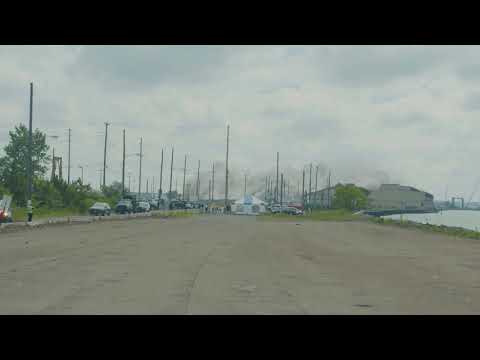