1 Half of Americans Were Affected by Lead Poisoning, Some of It Was From Gas

2 Study Shows Gas Stoves Are As Bad as 500,000 Cars Even Without Being Used

3 Ghost Flying Should Have Been Stopped Yesteryear, Shows Double Standard for Emissions

5 Lead-Acid Ignition Batteries Will Stick Around for Another Decade or More
Car video reviews:
Space Junk

Whistleblowers Reveal New Kind of Pollution Made by Vessels, It's Real Bad

A recent investigation made by several journalists from Deutsche Welle's Planet A, based on insights from whistleblowers, has revealed that vessels generate another kind of pollution that was previously unknown. It is called bilge dumping, and whistleblowers claim that it is a widespread practice in the seafaring industry.
6 photos

Sadly, the entire thing happens in the ocean, and it is tough to track down, even with satellites, as the waste in question may be confused with something else, including fishing nets. The problem lies with the fact that coastguard inspections only happen in harbors, while bilge dumping takes place many miles away, sometimes in the ocean.

Now, you might be wondering what the deal is with this bilge, how it exists, and why is it dumped in the world's seas. Well, as you may be aware, ships have diesel engines, but they do not run on the same kind of fuel that vehicles do. Instead, their massive engines use a thicker fuel, and the latter is not the cleanest thing in the world.

The bilge we are writing about is the lowest part of a ship's inner hull, and it is usually underwater. All ships have a bilge, and these are equipped with pumps to help prevent a flood or other incidents.

The problem lies in the fact that water, oil, and other liquids get mixed up in the bilges of these ships, and there are tanks to help contain the result.

As you can imagine, the resulting liquid is toxic, and it has been heavily regulated for more than half a century, as DW notes. Ironically, the pumps used for bilge dumping are meant to collect oil from the sea, store it in tanks, and then dump it in a dedicated container in a port.

The normal procedure in this situation is for the ships to dump their bilge water in a specially designed place in a harbor. The investigators remarked that doing so takes time, and seafarers consider this procedure a waste of time. Spending too much time in a place is considered a waste of money in the shipping industry, which is why they end up doing harm to the world's oceans instead.

The only hope, for now, is the fact that the latest generation of satellites will be able to discern the types of materials discharged by vessels, as well as the thickness of the oil slicks. One day, it may be enough to incriminate offenders, but that day is still far into the future, if we still have any marine life left at that point. 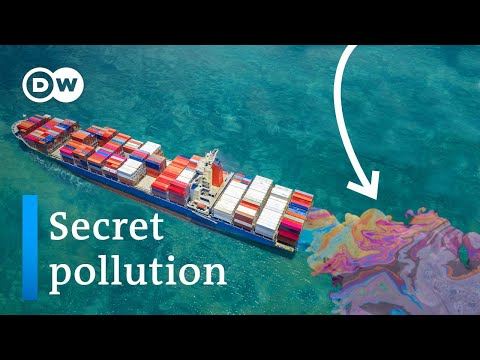