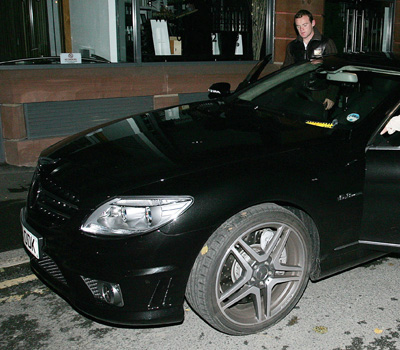 After losing his Mercedes-Benz sponsorship deal, it seems the 23-year-old Manchester United striker has set his eyes on a £64,000 BMW, albeit there is no indication yet on the type of engine the car was fitted with, and took it for a ride at the Carrington training ground.

The car was worth £121,200, but Rooney cannot complain, since his garage is not yet empty. The striker owns an impressive fleet of vehicles, including a Bentley, a Cadillac, an Aston Martin, a Range Rover Sport and a Lamborghini,

Rooney is not short on sponsorships though. He has a £5 million ten-year deal with Nike and earns £1 million a year from advertising for Coca-Cola, which also feature Coleen, his wife.

He also has a six-figure deal with video game-maker Electronic Arts and a £5 million book deal with HarperCollins.

Considering that Rooney and his wife will become parents later this year, a luxury family car would be a smart choice. As the poem goes, ‘... first comes love, then comes marriage, then comes Little Rooney in a... BMW 7 Series?’