Daniel Patrascu
Close call for two astronauts on Thursday, as the machine that was supposed to take them to the International Space Station failed a few minutes into the flight and forced them to go for a ballistic descent to save their lives.
1 photo
As the dust over the incident begins to clear, NASA and its Russian counterpart Roscosmos are still at a loss as what exactly went wrong. What engineers do know is that at the moment the escape tower of the Soyuz was jettisoned, problems began.

A video posted on Thursday by Russian publication RT shows the minute or so that precedes the incident. The Soyuz is seen climbing normally towards space, and the NASA representative that comments the launch live is heard saying several times that everything is well and all is proceeding as planned.

We also get a view of the crew inside, with American astronaut Nick Hague and Russian cosmonaut Aleksey Ovchinin looking very focused on what they are doing, both holding tablets in their hands. A little over two minutes into the flight, the astronauts are seen being jerked violently, as the commentator announces escape tower separation.

On the background, a Russian-speaking mission control engineer is heard, doubled by an English translator, as the image cuts to an animation of what the Soyuz was intended to do.

Following the failure, the Soyuz capsule entered emergency mode, and the astronauts aborted the climb and began descending back to Earth. The capsule landed safely, and the two were recovered by emergency personnel. Both escaped without injury, as the safety systems of the Soyuz did what they were intended to do.

Both NASA and Roscosmos have launched investigations into the matter, while engineers are attempting to find and fix the problem.

Since Soyuz is currently the single crew-capable capsule, no astronaut will be heading to the ISS for a while, meaning the crew currently on the station has no way of returning back to Earth. 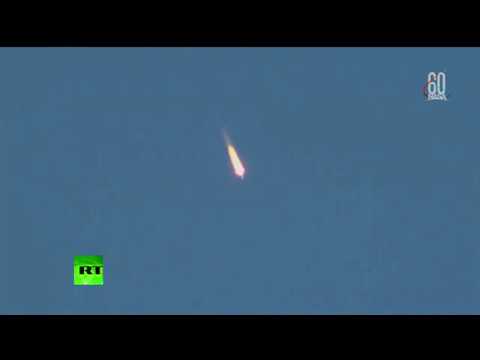