1 Video Breakdown of Robocar Components Ahead of Historic Goodwood Run

Home > News > Auto Events
Daniel Patrascu
History was made this week at the Goodwood Festival of Speed, after an autonomous car managed for the first time to complete the hill climb on its own.
1 photo
The car in question is the Robocar, and proof of its achievement was posted online on Friday. Robocar’s run was conducted before the official start of the event on Thursday, with no spectators.

The run was recorded with a 360 camera system mounted on the fuselage of vehicle. The footage will be made available for those interested in a virtual reality experience at the Future Lab at the location.

“Roborace plays an important role in the future of mobility, challenging public perceptions and providing a platform to advance new technologies,” said in a statement Charles Gordon-Lennox, the Duke of Richmond and Founder of the Festival of Speed.

“This makes them the perfect partner to undertake this significant feat."

Robocar is 4.8 meters long and 2 meters wide. It has no cockpit and weighs only 1,000 kg. Four electric motors spin the wheels, each developing 300kW, and a battery pack good for 540kW provides the juice it needs.

The brain of the car, or the pilot, if you like, is a pair of Nvidia Drive PX2 artificial intelligence platforms. The two use 15 ultrasonic sensors, six cameras, five LIDAR and two radar systems to determine the car’s position and decide on the course to follow, whether to overtake and so on.

Usually, this car is seen on Formula E circuits before the official races. Those who built it plan to create a racing series for autonomous vehicles in the near future.

Initially, the first race in the Roborace series should have taken place during the 2016-2017 Formula E season. 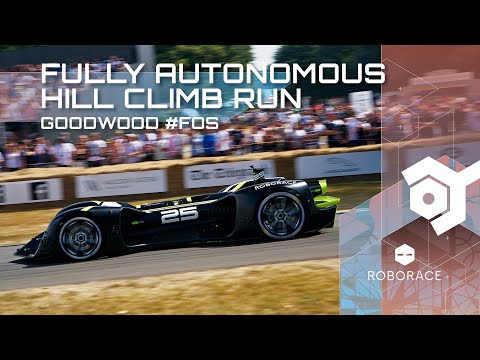