One of the surprise celebrities to be part of the newest film of the famous action series Fast and Furious is pop star Iggy Azalea. The news came out recently, in an interview Vin Diesel was doing about his new Guardians of The Galaxy movie.
4 photos

Vin Diesel was doing an interview for French station Sky Rock FM recently, promoting his newest Sci-Fi movie, Guardians of The Galaxy. At some point the reporter asked him which song the movie star would chose if he had to dance on it. Diesel answered he’ll opt for Iggy Azalea’s “Fancy” song because he just worked with her two weeks ago and he’ll have to be loyal.

The action super star revealed that Australian pop artist Amethyst Amelia Kelly, best known under her stage name Iggy Azalea, joined the cast of the newest movie of the famous series. Vin Diesel isn’t the only one excited about the new cast, considering Michelle Rodriguez posted a photo collage on her Facebook that includes a pic of her posing with the tall blonde.

“Was great working with you Iggy Azalea, love to see you in concert. You rock. And to the extras from yesterday’s last day of shooting Fast & Furious 7 -- you guys are beautiful” Rodriguez wrote on her wall. Soon after, Iggy also posted an image of her having fun with her new on set colleague, posing next to what looks like a Ford SVT Raptor. In other words, we might just be up to some hardcore off-road hotness in the new movie, to bad we have to wait until April next year. 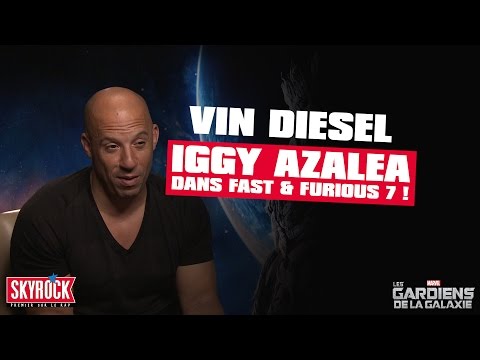