3 Rare 1972 Ford Ranchero Squire Is Not Cool Enough to Sell, Still Out There

The Never-Ending Quest for the El Chapo McLaren F1 and a $2.5 Million Scam

Mihnea Radu
Ford Month is almost over, but we saved a spot this 1964 Ranchero because it's a TV star, not to mention one of the most original vehicles of its kind. It's safe to say there's no other one like it in the world, especially considering the money that went into this build.
11 photos

The Ford ute got presented at the 2018 SEMA show, but it was tucked away in a corner and didn't get the kind of attention it deserved. In case you watch car shows on TV, you might already be familiar with the Ranchero because it was featured on Bitchin' Ride episode 14 of season 6.

Watching a car being built on a show doesn't give you the full picture, though. You might see some fake shop drama or a few mechanical problems being highlighted, but the Ranchero project actually took 18 months to complete and reportedly costs $750,000.

We don't quite get why the owner decided to spend so much money on this particular model when he could have filled a whole garage with different muscle cars. But the paint job is undeniably cool. The color is a Kindig-It custom mix by AkzoNobel, called Sweet & Sour. Underneath that is a whole bunch of custom fabrication.

For example, you might notice that the whole tailgate is gone, together with the door handles, which have been replaced with Kindig's own flush setup. She's got a custom billet grille, "slivered" down bumpers and the gas filler door is also absent, replaced by a Hot Match smooth cap on the bed floor.

For us, the highlight of the build is how the engine is arranged. Normally, this Ranchero would have something shamefully small and under-powered, like a 289. But Kindig managed to install a 600ci Jon Kaase-built big block. That's a 9.8-liter, yet the hood looks so normal!

The 1,200 wheel horsepower output is almost as shocking as the fact that twin turbochargers are located in the bed. The old truck is built like a dragster, down to the GM Powerglide 2-speed transmission. 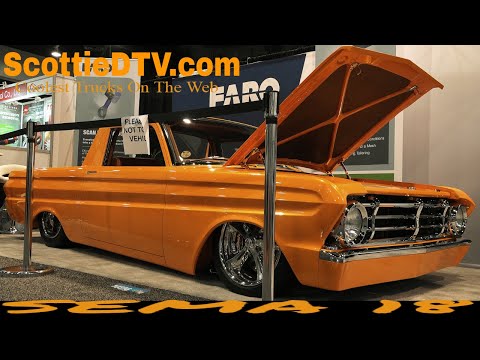