2 Lexus IS 250 Gets New Racing Exhaust From Vivid Racing

Gabriel Brindusescu
Everyone is eager to see how the next Lexus IS F will look and feel. The current sleeper-looking model is on sale up until the end of the year, after which the next generation has to step on the scene.
14 photos

The luxury automaker said nothing clear about its development, but this won’t stop us thinking about how the next Lexus performance sedan will be.

It most certainly will inherit the new RC F’s V8 that puts out over 450 hp (yes, Lexus still hasn’t put an official exact power output), get an 8-speed direct-shift automatic gearbox and a torque vectoring differential. But how will it look?

Well, regarding at how similar the old IS F was with the standard version, we think the tradition will continue to the new generation two. The IS fitted with the F Sport pack is already an astounding looking sedan, so don’t expect to see a major style change on the F.

Japanese tuner Tom’s just revealed a new body kit for the 2014 Lexus IS F Sport, which might show us the way the F version will probably head. I mean, don’t look for beefed fenders and redesigned bumpers. Just some lower lips, the classic oblique double-barrel exhausts and maybe a hood vent along with a set of new rims.

Things you can already see offered by Tom’s kit here. Hilariously though, the kit is applied on the least powerful IS 300h version. Still, it looks awesome. 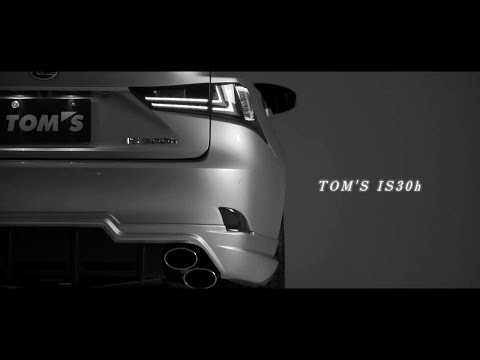