5 Not All Drivers Loved HitchBOT - People Found It Decapitated in Philadelphia
Car video reviews:
Up Next

Toyota is investing $1 billion in a new artificial intelligence company, Tesla Motors wants an autonomous arm for its superchargers, while faster and stronger robots shaped like dogs keep popping up on YouTube. The latest news to panic all those Judgement Day believers is a genuine Guinness World Record achieved by a robot.
1 photo
Developed by a Chinese team led by Professor Li Qingdu, from the College of Automation of Chongqing, University of Posts and Telecommunications, the robot took a long, long walk recently. Dubbed Xingshe No.1 - which implies there’s probably going to be a number two - the four-legged machine took the title of the quadruped robot to cover the longest distance, after traveling an impressive 83.28 miles (134.03 km).

According to the world renowned record keeper, a quadruped robot is a single mechanical machine that is guided by a computer program or electronic circuitry, with four articulated legs and no wheels. Worry not, though, there were strict rules.

The robot had to complete its journey on a single charge or tank of fuel, and so, moving continuously for 54 hours 34 minutes, Walker 1 completed 1,405 laps of a 95.39 meter indoor track. It ran rings around the previous record-holder, Cornell University’s Ranger Robot, which covered a comparatively small distance of 40.5 miles (65 .18 km) back in 2011.

Robot fans may celebrate the slow rise of the machine, but they should know this project is not here to create new-age robots that inspire catastrophic fantasies. Professor Qingdu’s objective was, in fact, to study electrical efficiency, increase the length a robot can trek, its reliability, durability and ability to perform a remotely controlled mission in situations that would be dangerous for humans. 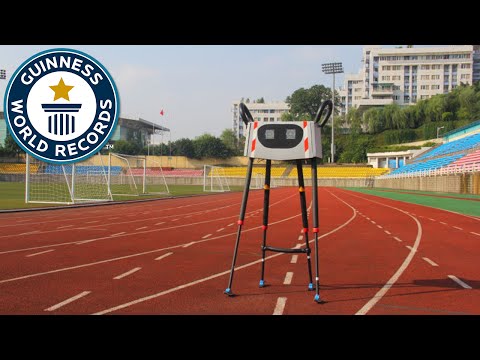