5 Mechanic Who Dropped Out of School Made a 3.6-Ton Transformer-Lookalike Robot by Himself
Car video reviews:
Up Next

You must have had at least one nightmare that involved insects. And if you did, then you’ll find that this insect should never leave the sphere of the imaginary. But the truth is that the Hallucigenia fossil - a worm that had tentacles on one side of its long body and two rows of spines on the other - existed some 550 millions years ago.
1 photo
It may not be here nowadays, but it’s still present through a robot the Japanese are building with similar features, apparently. Going by under the name Halluc IIx, the robotic contraption is a prototype engineers at the Future Robotics Technology Centre (FRTC), at the Chiba Institute of Technology in Japan, have created.

Scientists are using it to develop future transportation technologies, and the most recent unit was presented freshly at the Ars Electronica in Austria. It’s here to prove that cars in the future may be able to adapt to the terrain they are driving on. They might be able to dance, spin, and even walk on tiptoes. Sure we see this robot rather turning into a tank or some off-road contraption, even so, it would bring a hell of a change in the industry.

The II in its name comes from the fact the Halluc prototype presented in the video bellow is currently in its second generation. The bigger project called Hallucigenia is looking into new ways to rethink the relationships between men, nature and mobility and we have to say the approach is unique. Here’s how its creators describe the prototype:

“Halluc II is a robot/vehicle that can cope with the natural and rough environment. It features a newly developed ultra-multi-motored system with 56 motors, which makes traveling on uneven surfaces possible and eliminates the need for paving.“

Now, looking at how people are taking the self-driving cars so far, we’d like to see how motorists will react when they see all those wheels turning into legs and start walking. 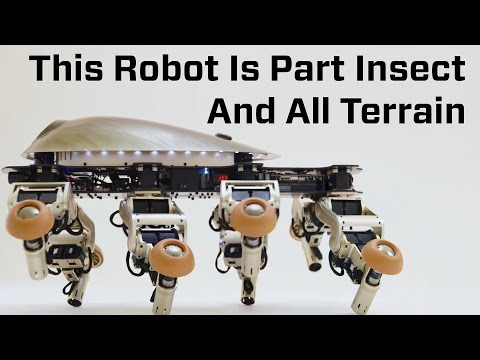