3 Vossen Travels to Paris, Meets Up with Akrapovic 1M Coupe

1 photo
The BMW E82 1 Series Coupe is very well known around the Bimmer community. That’s because it had one M version that was better than anyone expected. The 1M Coupe is still regarded as a sort of benchmark other cars have to reach despite it being turbocharged.
That’s right, as brilliant as that car was, it used not one but two turbochargers and, even though they were perfectly tuned, they still showed a bit of turbo lag. That was probably the only problem with the 1M, if you could call it that. Almost nobody complained about it.
To solve even that problem, some people thought that a naturally aspirated engine would be better inside the same chassis. But what engine to choose? It would have to be one with similar specs.
Therefore, the best choice was instantly found: the S65 V8. That’s right, someone managed to fit a 4-liter V8 under the bonnet of a 1 Series, transmission included. It’s the car you see in the video below.
Compared to a 1M Coupe, this model would have 80 more horsepower but 50 Nm (32 lb-ft) less at 400 Nm (295 lb-ft). Is it worth the trouble? As far as pedal response goes, definitely but there are other issues at hand here as well.
Sure, the sound of a V8 will never grow old, especially the sound of BMW’s S65 units. At the same time, the balance of the car was destroyed. That’s because the 3-liter inline 6-cylinder N54 engine is around 70 kg (154 lbs) lighter than its 8-cylinder counterpart. Adding that kind of weight to the front axle means ruined dynamics. Well, maybe not ruined but definitely not improved either.
In the end, it’s all up to each individual. The car is definitely faster, even with less torque but it won’t be as snappy as the original 1M, that’s for sure. What would you prefer? The V8 or the inline-6 in this small coupe? 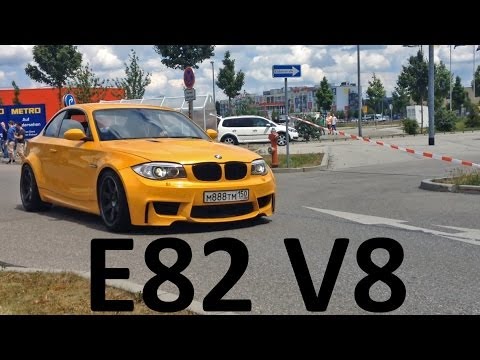