1 Honda MotoCompo Could Be Making an Electric Comeback as Motocompacto

4 The Volkswagen Streetmate - Coming Soon to Change the Mobility Game

5 The Super Soco TS is Not the Fastest, Not the Strongest, But the Most Affordable
Car video reviews:
Coverstory

It was bound to happen eventually. Someone had to figure out how to make electric scooters, bikes and motorcycles just as fast or even faster than their ICE brethren. That certain someone is Super Soco.

You’ve probably heard us mention Super Soco before with their TS model. Not the fastest or strongest in its class, but surely the most affordable. This time the team offers us their newest 2020 innovation.

It’s called the Super Soco CPX and is the freshest addition to the family. But this isn’t its main highlight. After numerous tests on range, power, and speed, it’s come out as an equivalent to a 125-cc engine.

Now, it's no longer any wonder that these vehicles are electric, but the level they play the game at and for what price, is simply wonderful. So far it seems to be the beefiest and most accessible of EV brands. Maybe that's why the success. But the CPX isn't a motorcycle. Then again, it doesn’t need to be.

When we first see it, we realize off the bat that it’s a scooter. The body is reminiscent of any other scooter around, so no conceptual stuff. It's all just down to earth functionality. A wheelbase of 53.7 in (1365 mm) keeps it nice and tight, while a ground clearance of nearly 6 inches (145 mm), the CPX offers enough room to cover any concrete jungles.

Like all other vehicles around, it all starts with a motor.  On the CPX, we can find the motor located on the rear swing-arm. This patented design has a rated power output of 4000W and a peak torque of 171 Nm or 126 ft-lbs. of force. This insane amount of power shoots you from zero to its top speed of 55 mph on a near linear power curve. Another component of the motor is a FOC Vector Controller. This component alone is responsible for up 16% of the engine's total power output.

Up next is the battery and its own capabilities. This EV has room for two 60V 45Ah batteries, which allow a 200 lb. (90kg) rider to travel near 90 miles (140km) at a cruising speed of 28 mph (45 kph). But that’s on two batteries. The base model only includes one, so you can probably look to cut those times in half. The batteries are also able to be recharged in three to four hours and are rated up to 1200 cycles with a three-year warranty.

Two neat perks of the CPX are the inclusion of a one-touch reverse button that allows you to reverse the EV easily, and a USB charging port for your mobile device. An app also tracks you bikes data and feeds it to you on your phone. This app is also connected to a real-time traffic system, probably Google Maps, and will show you the fastest and most efficient route to your destination.

At a price just under five grand, it's really an accessible speed demon.

P.S. Check out the video below. 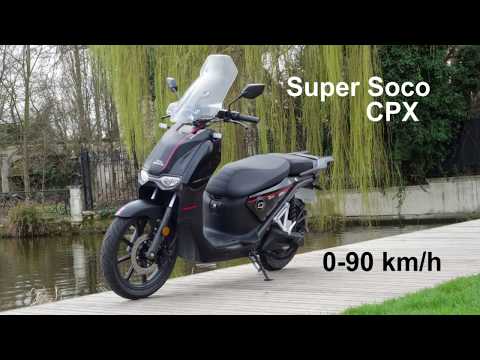 YouTuber Crashes Someone's Car, Teaches Lesson on Owning Up to Your MistakesSee all coverstories