3 Witness the NUMMI Shut Down

5 Sad Message from NUMMI's Local 2244
Car video reviews:
Up Next

One of the most undesirable news at the beginning of the year was the recent closure of the New United Motor Manufacturing, Inc. (NUMMI) plant in Fremont, California. The result of last year's GM bankruptcy, the closure and all its effects were somehow blamed onToyota, who was left to both tend to the shutting down and take the heat for one of the most loathed decisions made in the automotive industry in recent years. NUMMI was, for several decades, the last auto manufacturer on the West Coast. Most recently, it employed some 4,700 people (5,440 according to NUMMI's own figures, 4,550 represented by UAW Local 2244 and 890) and, according to California state numbers, was responsible in an indirect way for another 45,000 jobs in the supplier business. NUMMI kept in business around 3,600 North American suppliers, who had to supply parts for the 250,000 cars and 170,000 trucks which exited the factory gates every year. Helping them were another 1,000 California suppliers, with all the manpower behind the operation reaching 50,000 people. Now, the NUMMI facility is putting on its good clothes, as the people who are still left with the facility try to sell whatever is worth anything. All the workers represented by the UAW walked out the plant for good last Friday, April 2, after the assembly lines spat out the last red S-grade Corolla at 9:21 AM, Pacific Daylight Time. BEGINNING

The basis for NUMMI were set by American manufacturer GM in 1962, when the Fremont plant was erected to manufacture both cars and light trucks. For 20 years, the facility, not known as NUMMI at the time, became the epitome for poor quality, poor productivity and, most of all, extremely bad employer-worker relations. Having nothing to gain from the facility and having to battle the UAW at every corner, GM decided to pull the plug on the facility in 1982. 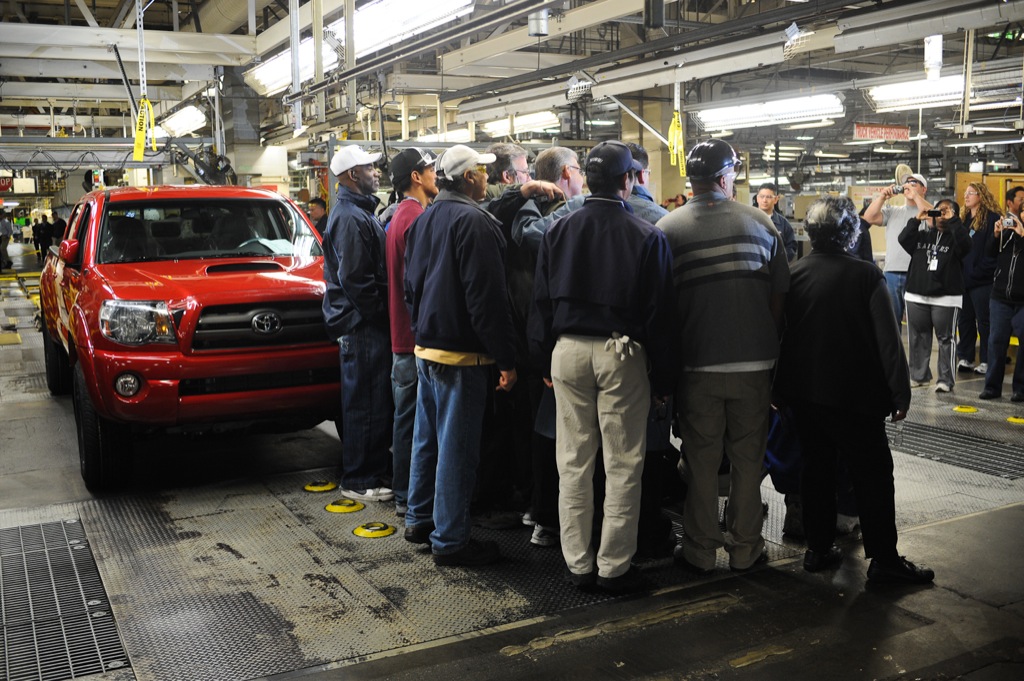 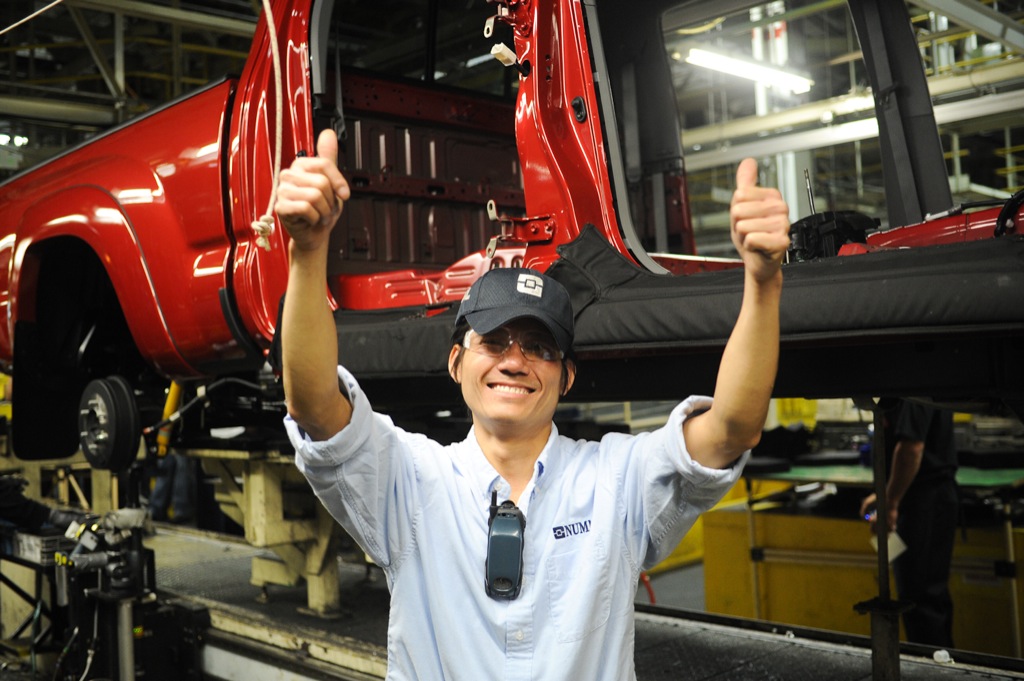 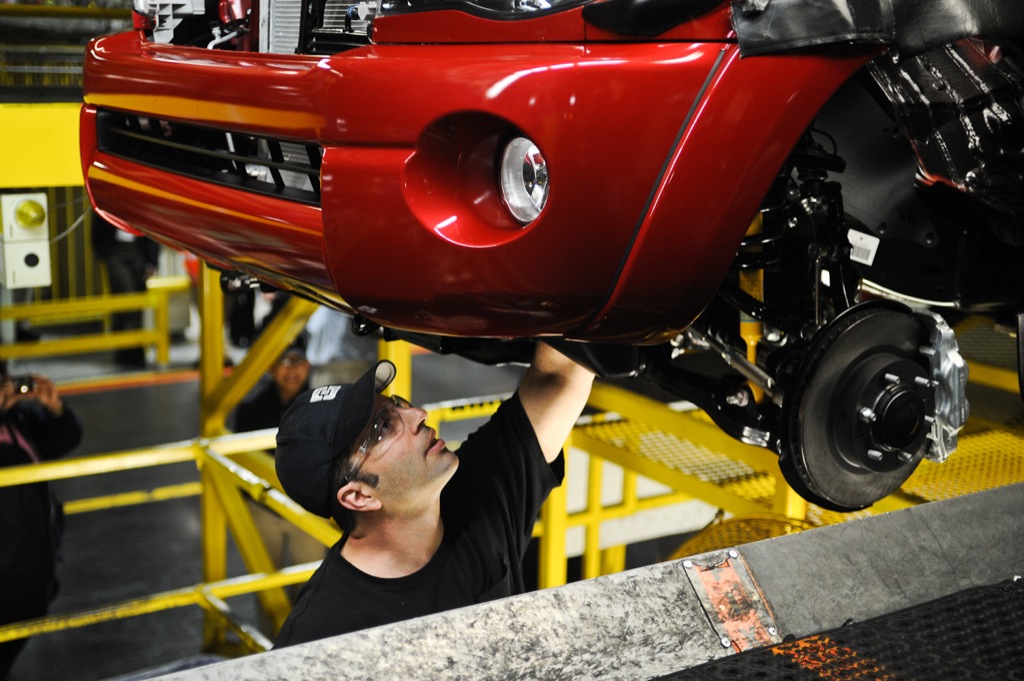 One year later, GM's CEO at that time - Roger Smith - approached Toyota for a possible joint venture. Remember, the '80s were a time when Japanese-built cars became more appealing to the American consumer than the locally produced ones. GM wanted and needed to get a closer look at how Toyotas were made. Small cars were especially out of GM's reach and comprehension, as the Americans had neither the means to built them cheap, nor the technologies to make them fuel-efficient and meet the dreaded CAFE standards.

In 1984, the common interest spawned the creation of New United Motor Manufacturing. GM contributed its now closed Fremont, California, plant and Toyota chipped in $100 million. The new operations needed $450 million to work, so the two carmakers had to turn to the California state for help as well.

The joint venture was a brilliant move made by GM. It scared the other Detroit Three members so much, that both Ford and Chrysler filed lawsuit to block the venture. The Federal Trade Commission (FTC) had to step in and, following a 15-month investigation, approved the venture. Initially, the FTC put a 12-year time limit for NUMMI, a time limit which was removed after several years of successful operation.

The first vehicle to be built under the same roof by Americans and Japanese was the Toyota Corolla sedan and hatchback. As part of the deal between the two carmakers, Toyota had to give GM a version of the car, to be marketed by GM under the Chevrolet Nova designation.

The Nova, born in December 1984, was instantly compared to its Japanese peer. All in the industry saw the Nova for what it was: a rebadged Toyota, based on the upmarket version of the Corolla. In 1984, Consumer Reports wrote about the Nova: "a class act among small cars... is virtually identical to the Corolla and it is assembled, fitted and finished as well as any Toyota we have seen." The Nova, somehow cannibalized by the recently launched Saturn brand, stayed in production only until 1988.

The car was followed by the Geo/Chevrolet Prizm, a model which replaced the poor selling previous Nova (meanwhile, the Japanese version wreaked havoc among buyers) in 1988. It too was a rebadged Toyota, taking inspiration from several Corolla models. The Prizm lasted until 2002.

One year later, GM debuts the mutant Pontiac Vibe: a rebadged Toyota Voltz (name for the Japanese market) with Toyota Matrix entrails wrapped around a Toyota Corolla E platform. The car was produced from 2003 until 2009, when GM decided to put Pontiac out of its misery. The models manufactured between 2009 and 2010 were caught in the Toyota recall nightmare which started last year. 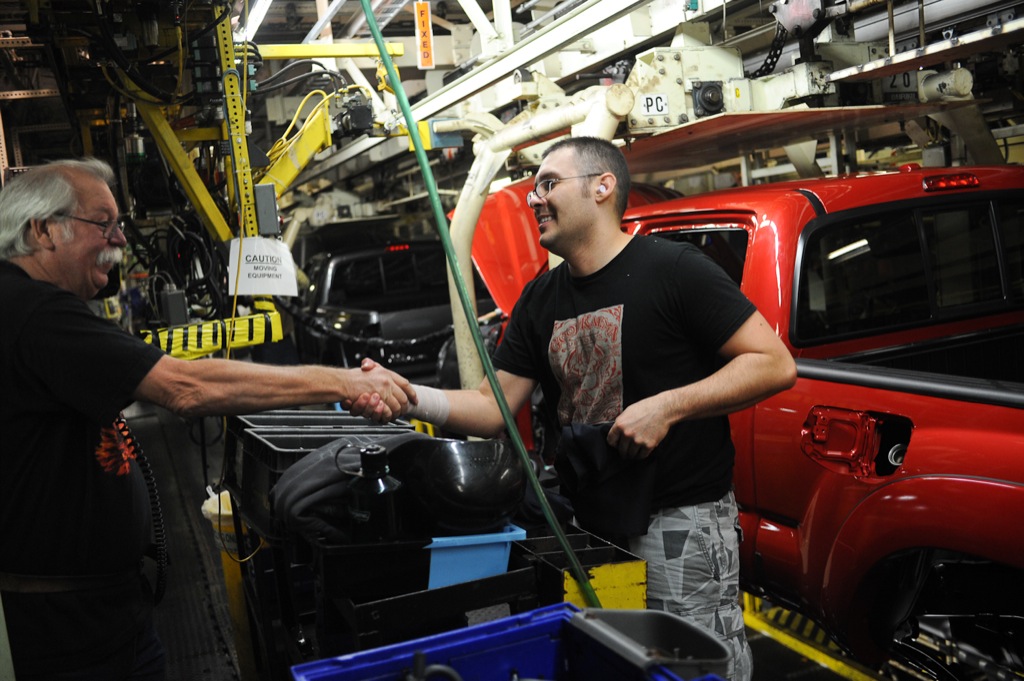 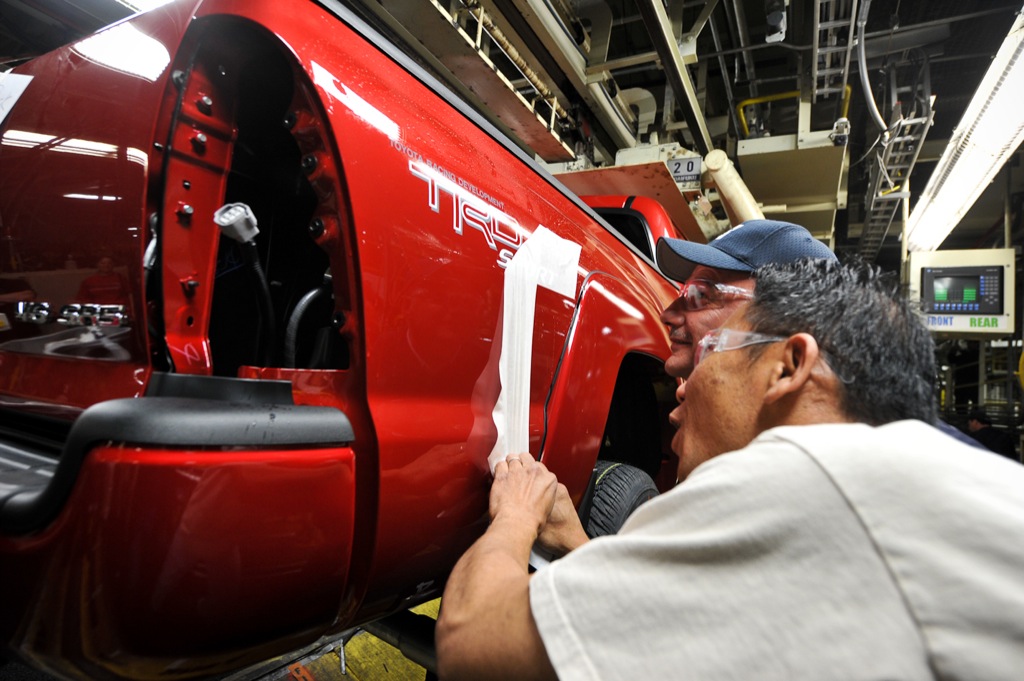 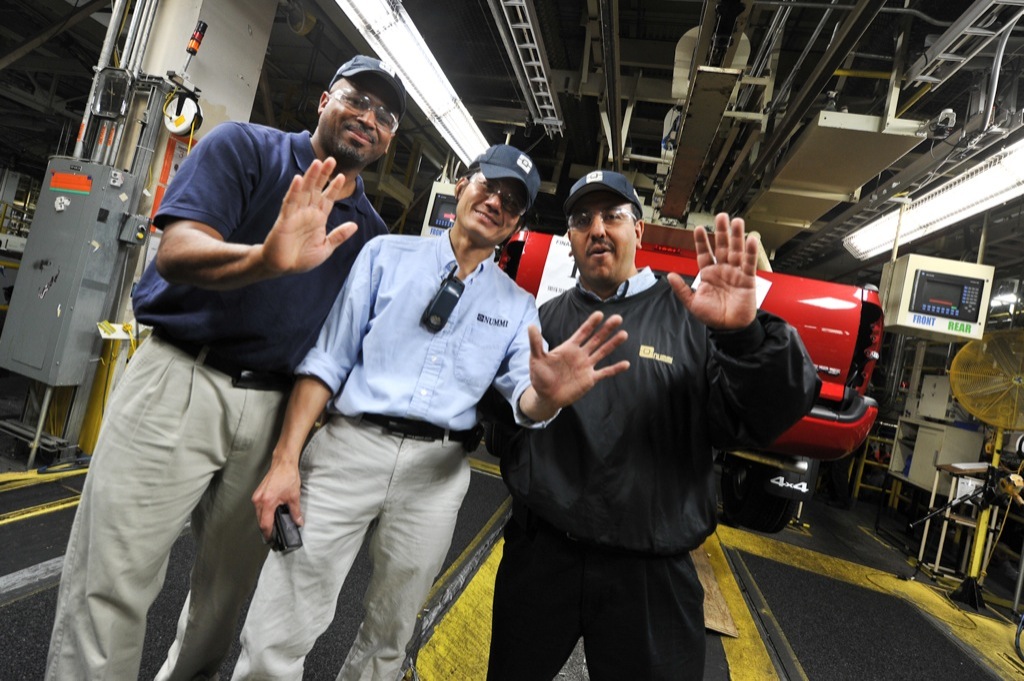 Unlike GM, Toyota handled NUMMI with much more enthusiasm. The Japanese carmaker manufactured here the Corolla, the Tacoma, the Sprinter and a Toyota pickup. Ironically, as the joint venture was dreamed in GM's offices, the last car and truck to exit NUMMI were Toyotas...

But it's not the car models, nor the sales numbers which will keep NUMMI in the collective California memory. Toyota brought with it (and no, we are not on Toyota's payroll) a new way of thinking the employer-worker relationship. If anything, NUMMI takes pride in the relationships it created between Toyota and the UAW, with the first collective bargaining agreement signed in 1985 by NUMMI and UAW 2244.

The result of that agreement was almost immediate. In 1988, NUMMI had to cut down production. Toyota however sent no one home, deciding instead to form the so-called kaizen teams, consisting of people who, in lack of a real role in the plant, participated in continuous improvement or special programs.

The way Toyota and NUMMI treated the workers was recognized in late 1980s by Secretary of Labor William Brock, who selected the facility as the US model of labor-management cooperation.

But most and foremost, Toyota and NUMMI served as a role model for GM. As the American manufacturer himself admits, its "Global Manufacturing System" manual (GMS) is heavily inspired by the "Toyota Production System" manual. The Spring Hill, Tennessee, facility where GM assembled for some two decades Saturn models was also inspired by the NUMMI assembly system and lines.

The myth goes that before Toyota, workers in GM's Fremont plant sabotaged cars to guarantee overtime pay, promoted drug and alcohol use in the factory and even skipped work because they hated the management. When Toyota came into the picture, it hired, against GM's advice, basically the same people. 450 of them were sent in the early days in Japan, at the Takaoka plant, were they spent three weeks. They came back changed people, the ones who gave birth to the NUMMI Pride. 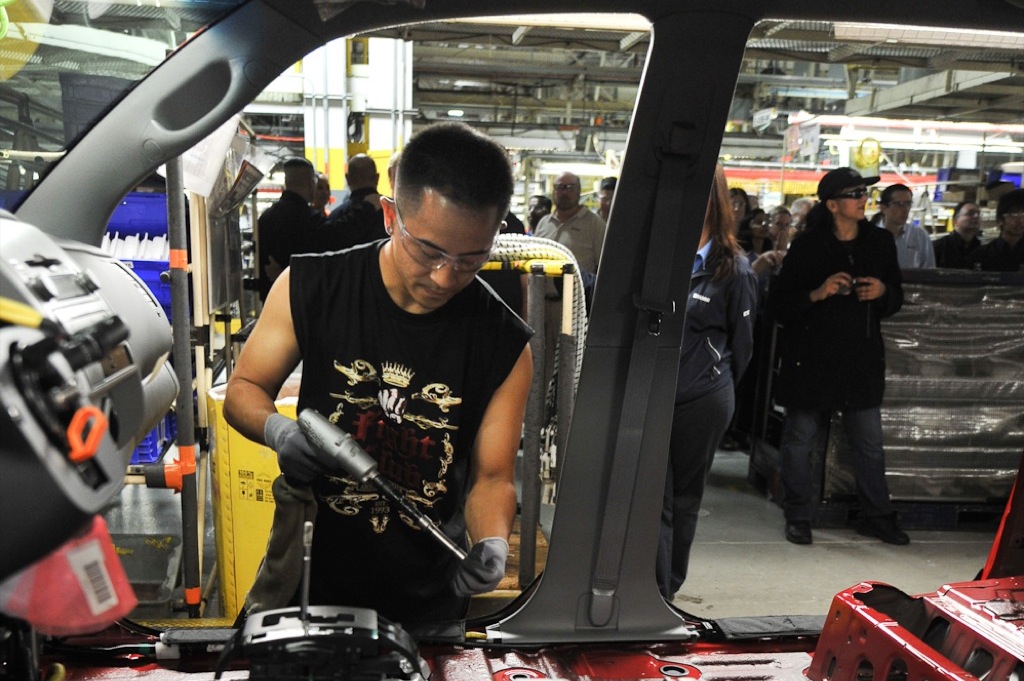 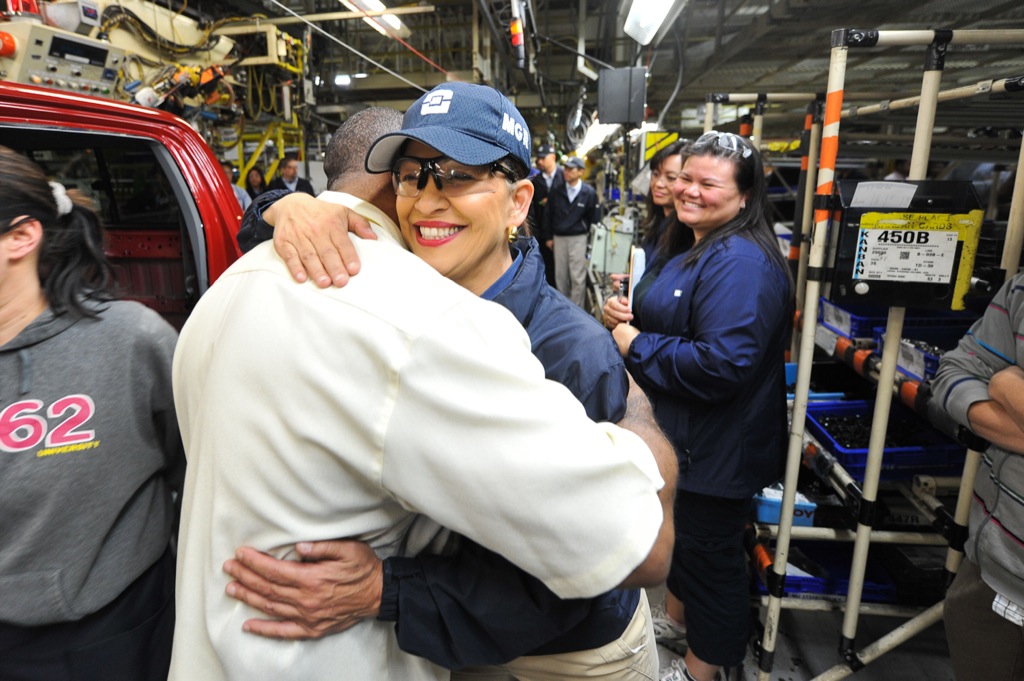 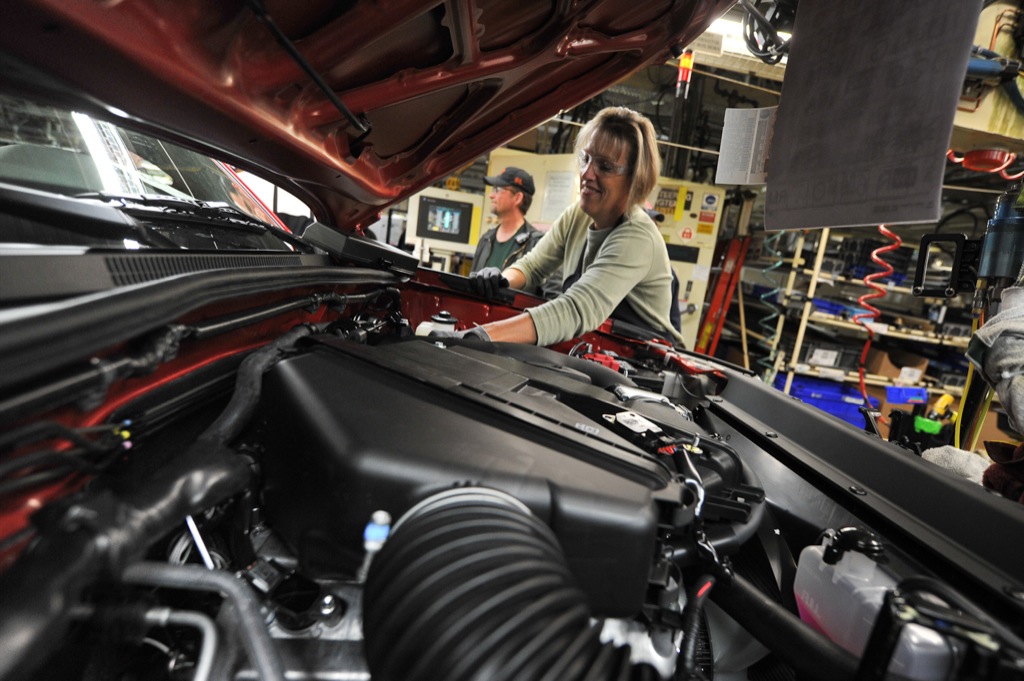 The success of the labor-management cooperation and its abrupt end however did stir sadness, anger and even accusations. In the last days of NUMMI, the same Local 2244 which started it all back in 1985 issued the following statement, signed by president Sergio Santos, in response to Toyota's severance package:

"The offer mandates a gag order that I believe violates our First Amendment rights under the U.S. Constitution, and our rights to Freedom of Association under the Labor Rights Conventions of the United Nations' International Labor Organization (ILO)."

"Nonetheless, under conditions set by Toyota, after the agreement is ratified, I will no longer be able to comment on the plant closing or its impact on our members."

"Toyota and its surrogate, NUMMI, will issue its own releases boasting of its generosity and philanthropy, its dedication to its workforce and the communities where it operates."

"But as the tens of thousands of people who made Toyota number one run out of money and unemployment benefits, as we lose our homes, our health benefits, and ultimately our health, the true toll of Toyota's decision to abandon vehicle production in California will become clear to everyone."

"Toyota has betrayed us and now they have gagged us. We will be silent in the future, but we deserve better. We are accepting the terms of Toyota's settlement out of necessity, as a means of securing some limited funds for our families."