4 “The Jetpack Guy Is Back” Flying Into LAX Flight Path, FBI Is Investigating

Invented in 2016, with the goal of defining a new era in human aviation, Richard Browning’s Jet Suit has proved its usefulness multiple times so far, proving that it can have applications in the military, search and rescue missions, providing medical care, and more. The latest footage released by Gravity Industries, the company behind the cool invention, shows us how the flying backpack can scale a Lake District Mountain in under 4 minutes.
6 photos

Richard Browning is a visionary and a great inventor who’s taken the aviation world by storm when he introduced us to the world’s first patented Jet Suit, fulfilling one of the biggest dreams humans ever had: to be able to fly. Earlier this year, Gravity Industries boasted that it achieved over 100 flights using the Iron Man-like suit, in over 30 countries. The gravity-defying jet engine powered suit even holds the record for the highest speed (85 mph/137 kph) achieved in such a jetpack.

But Browning’s goals go deeper than that and are much nobler than that of simply achieving global fame with his invention. For a while now, the Jet Suit has been tested in a series of Paramedic Response Exercises, proving its capabilities and training paramedics at the same time, so they can provide first response Critical Care in hard-to-reach areas.

Gravities Industries’ latest video proves that the Jet Suit can scale a Lake District Mountain way faster than using the conventional ways. The jetpack managed to fly up the Helvellyn mountain at an altitude of 3100 ft (around 950 m) in just three minutes and thirty seconds, while mountain rescue by foot takes over 70 minutes, according to Gravity Industries. The Jet Suit’s route was 1.2 miles (1.9 km) long, with 2,200 ft (670 m) of elevation gain, and it nailed its test with flying colors, despite the challenging conditions. The jetpack was not intimidated by the poor visibility, which would have grounded a HEMS (helicopter emergency medical service) helicopter.

While it still has its limitations (it can only fly for up to four minutes) and there's definitely room for improvement, the Jet Suit is still one impressive flying machine. It can operate in any weather conditions and can fly at altitudes of up to 12,000 ft (3,658 m). It is powered by five gas turbine engines that generate over 1,000 bhp.

You can take a look at the jetpack’s flight on mountain Helvellyn in the video below. 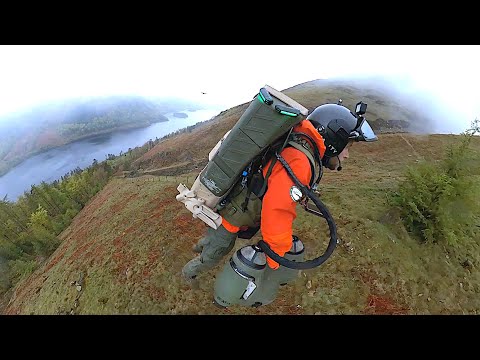