2 Google to Allow EV Charging Payments in the Maps App

4 Tesla Megapack Is the Mother of All Storage Solutions
Car video reviews:
Coverstory

Home > News > U-turn
5 Dec 2019, 14:49 UTC ·
by Alex Carausu
Tesla may have just found the perfect way to strengthen its charging infrastructure during the holidays, a period when more and more drivers are making long journeys and are relying on the company's Supercharger network.
3 photos

Halfway between Los Angeles and San Francisco there’s a charging station that has 40 charging ports. While that might be enough in any other day, during the Thanksgiving rush a queue of approximately 50 cars formed. That's not something you’d want to take part in, as it would probably feel just like it did during the oil crisis in 1973.

But hey, you'd think 40 charging stations and a 50 car queue doesn’t sound that alarming. A Tesla Model S at a Supercharger station will take about 20 minutes to charge 50% and 40 minutes to charge 80%, so it should go pretty quick. Not so much though, as simultaneous re-charging slows the process to an estimated 75 minutes.

This new problem could have an easy fix. According to images and videos captured by the Tesla community, it appears the electric car manufacturer has begun deploying mobile supercharger units at various charging stations that are located in high traffic areas. Every mobile Megapack is presumably fit to juice up about 100 cars, with 8 at the same time. Not bad for a trailer.

A video recorded by a Tesla owner Shelly Fraval, includes a brief conversation with one of the staff members that were installing the new mobile supercharger. According to the Tesla employee, the company is currently deploying Megapack powered mobile superchargers to provide an “extra hand” during major holidays, to avoid what happened this Thanksgiving.

Tesla claims that once the Megapack reaches its destination, it requires 40% less space and 10 times fewer parts than the current systems available. And as a result, this new high-density, modular system can be installed approximately 10 times faster. 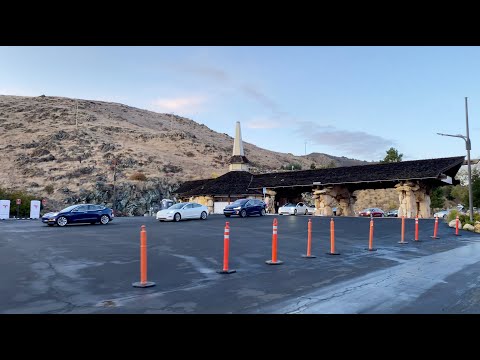 My wife @veganShelly stopped by the San Luis Obispo #Tesla #Supercharger and got the scoop on the new mobile #megapack! It’s a bank of urban chargers on wheels! Also #V3 coming soon, like I suspected!!! pic.twitter.com/J5HDaO4Tbu