Tata Magic Iris, the Most Beautiful Car in the World 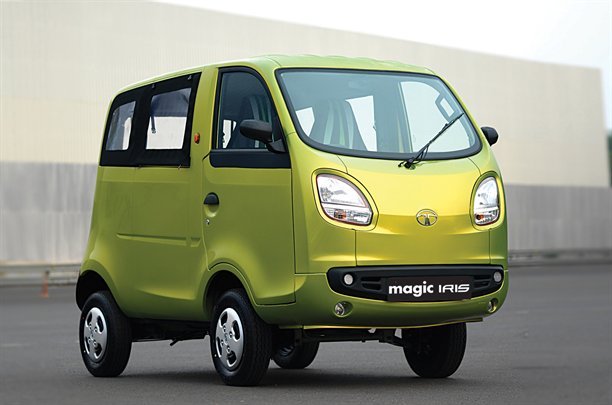 Actually, not. If we are to be as superficial as we can be, we would say the Magic Iris is the ugliest car in the world. Uglier even than the Nano, if you like. But let's not judge it by its appearance and give the thing a chance.

As you may have imagined, the Magic Iris was presented in New Delhi, where Indian carmaker Tata took advantage of the home court to showcase its might. And, apparently, for Tata might comes in the smallest of shapes and sizes.

According to Autocar, the Iris is powered by a tiny 611cc water-cooled diesel engine, capable of developing a heart stopping (meaning you grow old and die before it starts moving) 11 bhp, which allows for a top speed of 34 mph (54 km/h).

The Magic Iris is built with the at most consideration for the rider's safety, as it features all round sheets of metal. The body of the Magic Iris is wide enough to house no less than five people, according to Autoblog, and is capable of carrying them too, thanks to the choice of 12-inch radial or 10-inch wheels.

And that's about all there is, really. Oh, not quite. Tata does not look at the Magic Iris as being a car per se (although some here at autoevolution perceive it as a mutant Nano). No, they see it as a replacement for India's gazillion trikes, a four-wheeled alternative to them.

Which brings us back to how we started this whole piece. As you can see, the Magic Iris is not, indeed, the most beautiful car out there. But it is the dandiest tricycle in existence, isn't it?

Yes, we know, it has four wheels, it's not a tricycle per se...Damn it, Tata! Why couldn't you stick with building trucks, like you were doing 20 years ago?