After purchasing the Jaguar-Land Rover brands, the Indian carmaker Tata Motors started to work together with the British engineers, developing new models, and the Aria was one of them.

While Jaguar and Land Rover had significant experience in building luxury and off-road vehicles, its engineers didn't know how to make a budget car. Still, they worked together with their Indian colleagues and helped them develop a unique car: the Aria. It was a mix between a station wagon, an MPV, and an SUV.

Tata designers made tall side panels for the doors and rear quarter fenders, and smaller windows. The front of the car, on the other hand, featured a tall fascia with an upper grille integrated into the hood and a lower grille in the apron. Its short overhang favored the car's off-road abilities. Its headlights looked more appropriate for a sedan or a station wagon.

Inside, the 2-3-2 layout provided room for up to seven people on board. Inside, the car's roof sported a long rack with storage compartments and LED lights. It resembled an airplane design. Inside, the carmaker installed a wide and tall dashboard with a clean layout for the center stack and the center console. On top of the center stack, Tata installed a display for the infotainment system, which was positioned above the climate control unit. The high-mounted seats at the front and in the middle row allowed the carmaker to install a third row in the back. Apart from the front seats, all the others could have been folded down, enlarging the loading area.

Tata offered the Aria with a 2.2-liter turbo-diesel engine paired to a five-speed manual. It provided it either with a rear or a four-wheel-drive system. 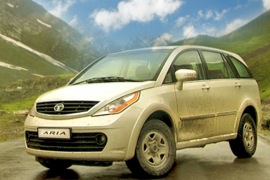