The Indian carmaker Tata produced this mid-size pickup mostly for the emerging markets and improved it over the years.

In India, it was also known as Tatamobile, and it was one of the most successful light-utility off-road vehicles. The carmaker tried to build it affordable, easy to maintain, and cheap to run. It wasn't built for some stunning performances on or off-road.

The Tata group engineers knew that a rounded shape costs more than a simple, flat sheet of metal, and that's why they made the Telcoline in a wedged style. It was a form-follow-function concept that worked well. With its body-on-frame construction and just a few lines on its sides, the Indian pickup was not the most attractive car to see, but neither the worst design ever.

Inside, everything was gray: the steering wheel, the upholstery, the dashboard, and the ceiling. Telcoline featured a pair of seats at the front and a bench in the rear. On specific markets, the vehicle was available with a front bench, fit for three occupants. The high seating position allowed the rear passengers to have adequate legroom but limited headroom. While the standard version offered cranked windows and a steering wheel, the upper trim level offered an air-conditioning unit and a CD-stereo.

Under the hood, depending on the production year and market, Tata installed either a 2.0-liter turbodiesel or a 3.0-liter naturally aspirated diesel. There was only a gearbox available, a 5-speed manual. 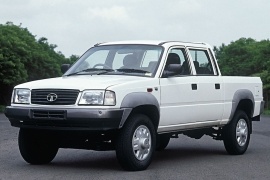