1 BMW Flies to Infinity and Beyond in Estonian Rally

2 Rallying a BMW M3 Requires a Crazy Amount of Courage

3 BMW E30 M3 Crashes into a Fence During Rally

5 Chris Harris Goes Rally Racing in a BMW E30 325i
Car video reviews:
Up Next

Taking on the Tail of the Dragon in an M3 with Slicks, in the Rain

1 photo
If you’re an American and really into racing cars and the best driving roads in the world, you probably already heard about the Tail of the Dragon. If you didn’t you should know that it’s probably one of the best pieces of tarmac in the US, decorated with 318 curves over just 11 miles.

Some claim that this is the number one road to go to for motorcycles and sports cars but we wouldn’t go so far. It is, however, extremely dangerous if you’re not careful about your speed. Add a bit of rain to the mix and some bad tires and you might end up going down the cliff in a heartbeat.

So, how would a BMW M3 fare in this ordeal? And no, we’re not talking about a modern, F80 model but an older generation, E36. Oh, and it’s in a rally… Could it save itself from going over the side barriers?

With a skilled driver behind the wheel, of course. While BMWs might not be the most efficient cars to enter rallies with, they are entertaining nonetheless. Just feeling that rear end skid to the sides is going to give you plenty of goose bumps.

That’s exactly what’s happening here, with Matt ‘Live Life Flat Out’ Brandenburg and his Brakim Racing car. To be completely honest, the race does not happen on the exact Tail of the Dragon but on road right next to it. It’s just as tight but not as famous. Check it out! 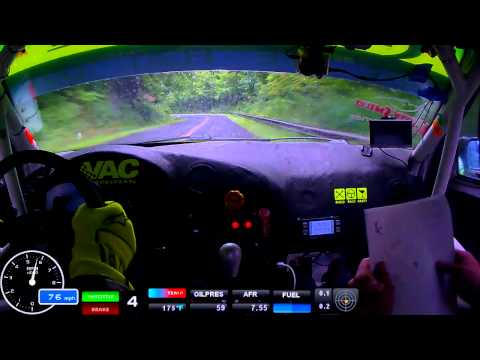