Welcome to the second half of autoevolution’s neo-retro bikes roundup. Last week, we presented Royal Enfields, Urals, Triumph’s Modern Classics, and BWM came up with the evil R nineT. Please bear in mind that this roundup is focused on bikes that are still in production. Getting past this point would mean recaping the entire history of motorcycling and that is far beyond the purpose of the article.

Retro-looking bikes are a tad harder to come across these days, and there are only few manufacturers that still make them, but it looks like this market segment has its devout fans. It’s great to see that both older and young riders are drawn to these bikes and keep the spirit alive. Sure thing, some of them are only doing this to earn more “hipster points”, but even they help keeping the spirit alive.
1. Norton Commando 961
Norton is back with a bang and it looks like business is booming in the new headquarters at Donington Hall. The iconic British maker is offering three versions of its new Commando 961 machine: the SF, the Café Racer and the Sport. All three bikes are obviously variations of the same platform and are based on the same chassis and engine, but we’ll leave you to decide which differences between them you would favor most. All in all, the new Norton Commando is a fully reborn bike, powered by an all-new parallel twin engine that can deliver 80 horsepower @7,700 rpm and 80 Nm (59 lb-ft) of torque @ 6,000 rpm, and this means that we’re looking at a really fun ride. The engine is still air/oil cooled and it resembles the old mills quite a lot, for a massive retro style matching the rest of the build.

Norton retained the unmistakable fuel tank knee cutaways and the generic attire of the bike, integrating modern parts, such as the Öhlins suspensions and Brembo brakes into the big picture quite intelligently. If you fancy retro-styled elements in ultra-modern carbon fiber, then 961 SF can make you happy, with CF fenders, chain guard and flyscreen. These new retro beasts also bring in steel-braided brake lines and VDO hybrid analog-digital instrumentation, clearly designed to look old school. 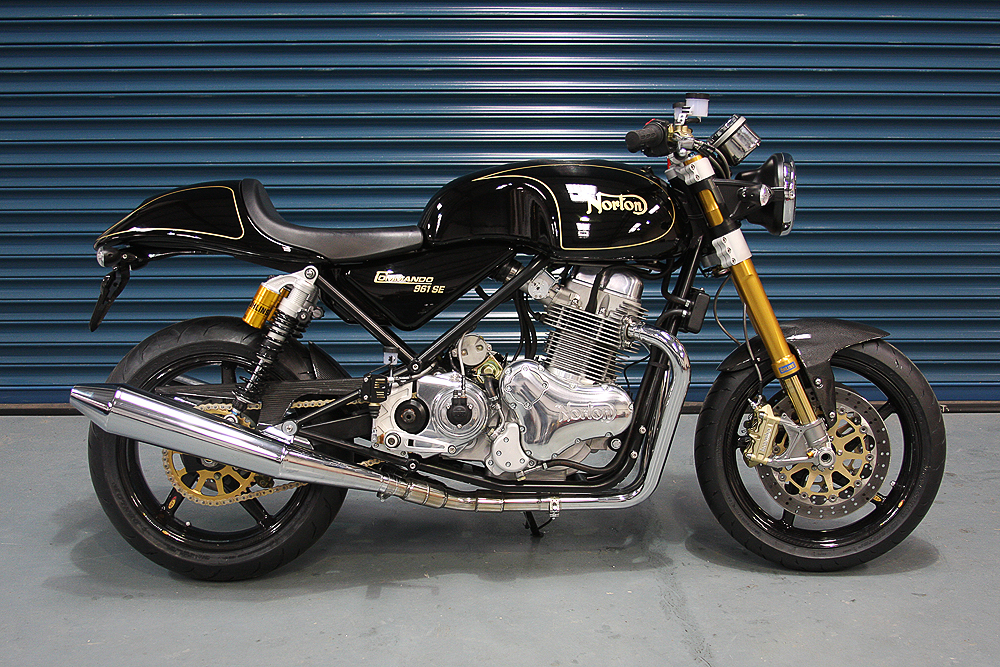 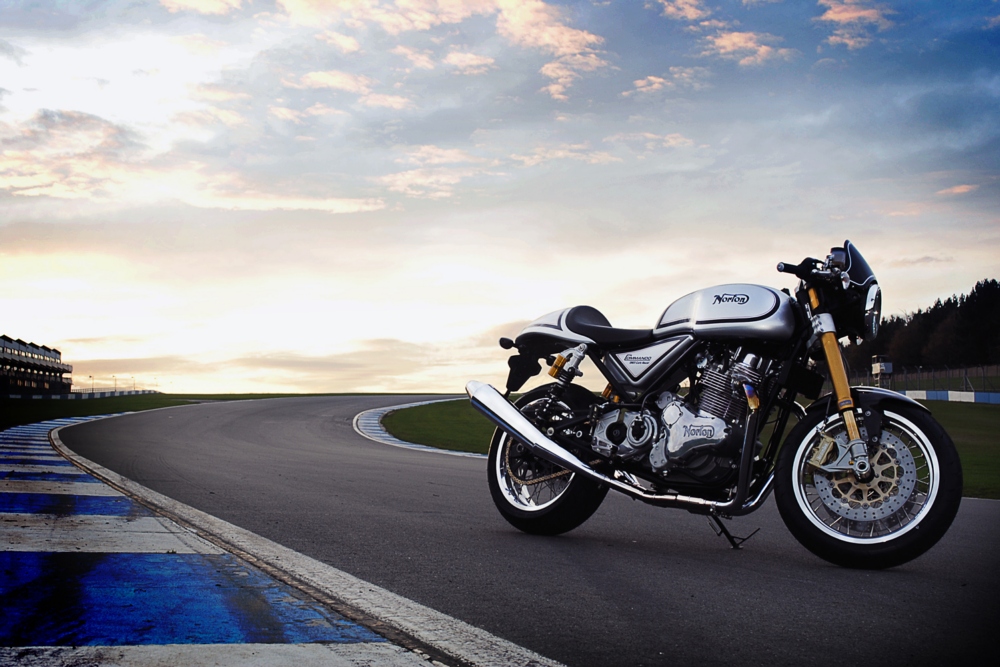 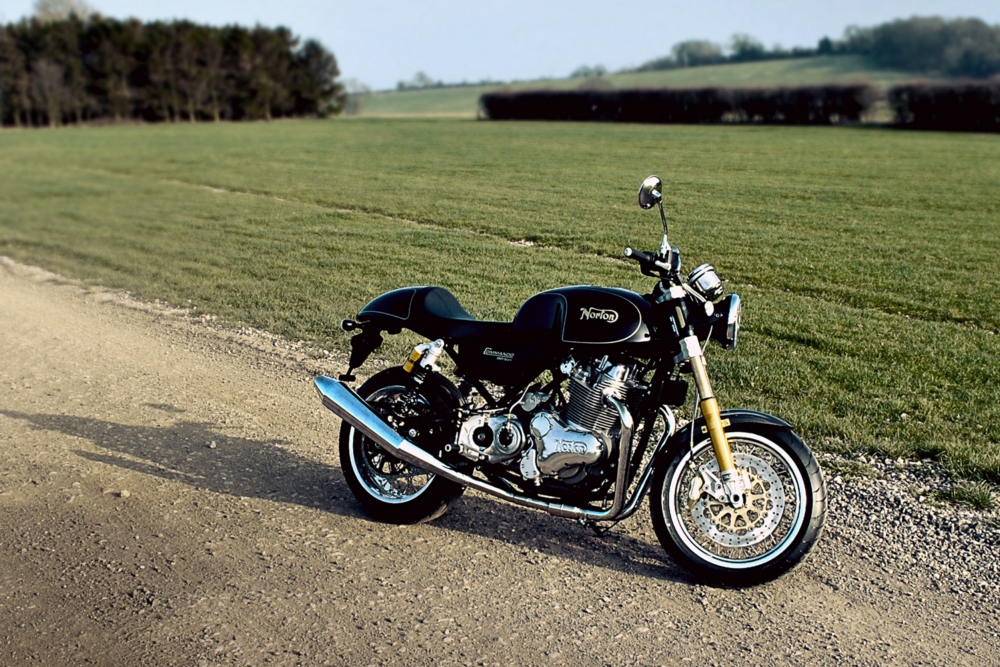 One of the best-looking neo-retro machines available today in markets around the world, the Norton Commando 961 is, however, a very expensive treat. The cheapest version available for a base price of £14,495 ($24,440 or €17,735) puts this machine in the dream-bike zone, but offers all-British, handmade excellence.
2. Yamaha SR400
The SR is one of Yamaha’s truly successful classic-looking series and many customizers and modders use SR400 or SR500 machines as the building basis for their new creations. Yamaha has already debuted an early 2015 SR400 model, which is expected to hit the dealerships in late May this year.

Whether looking at it from afar or getting a close encounter, the 2015 SR400 is as retro as it could ever be and its modern origin will be revealed only to the trained eye. A single-disc front brake is complemented by a drum in the rear, obviously without ABS. The single cylinder is air-cooled, but a closer look will reveal that we’re dealing with an injected engine. 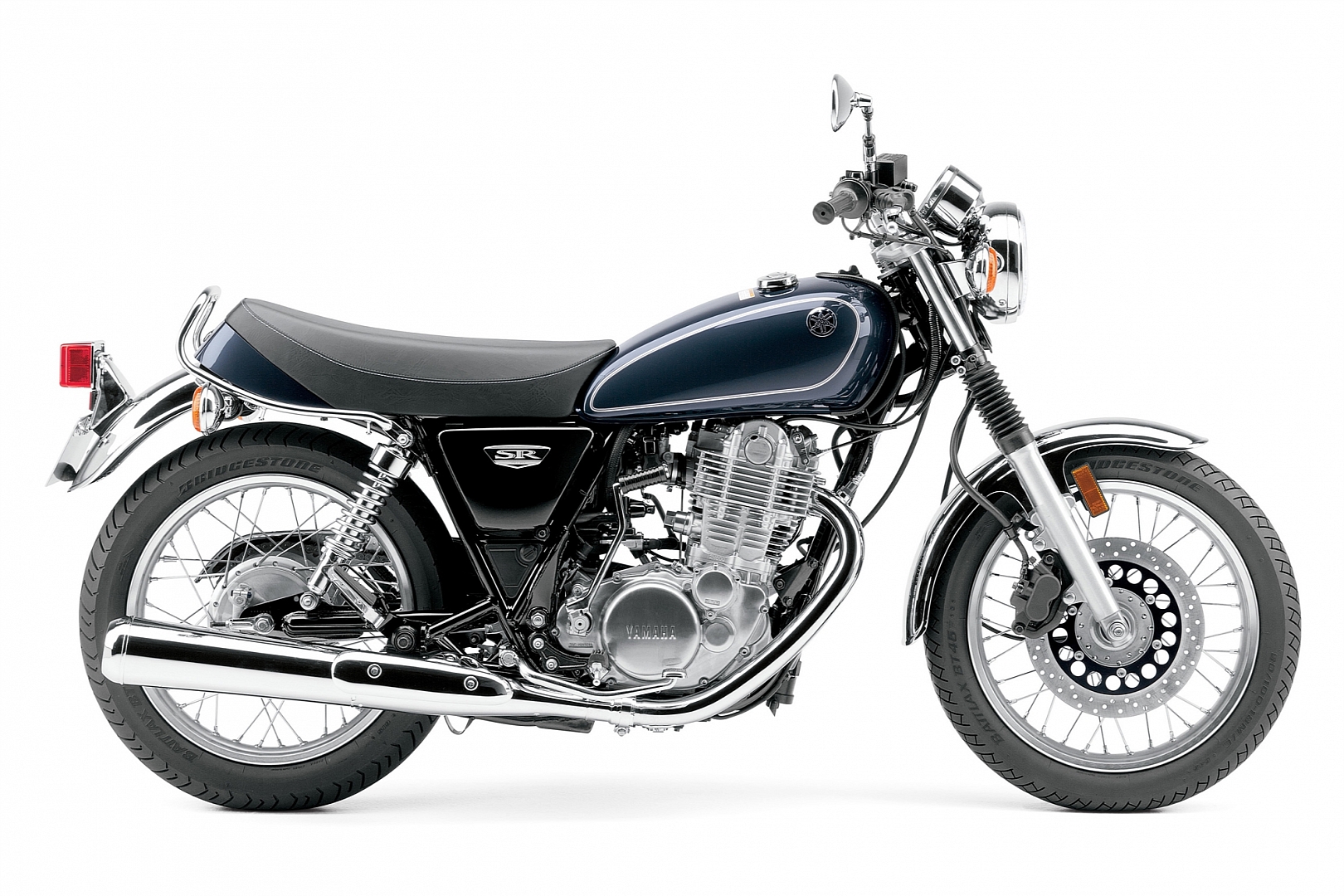 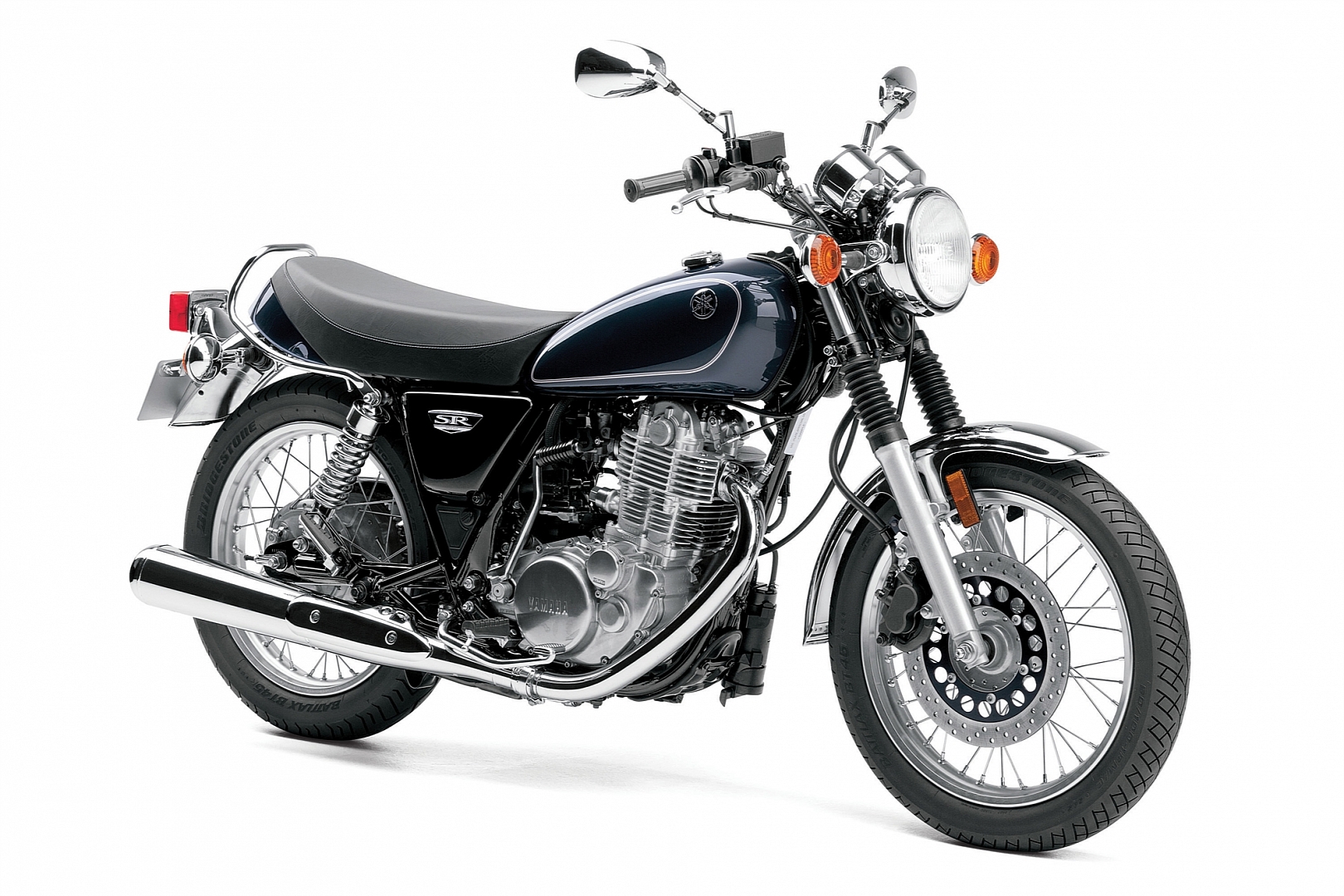 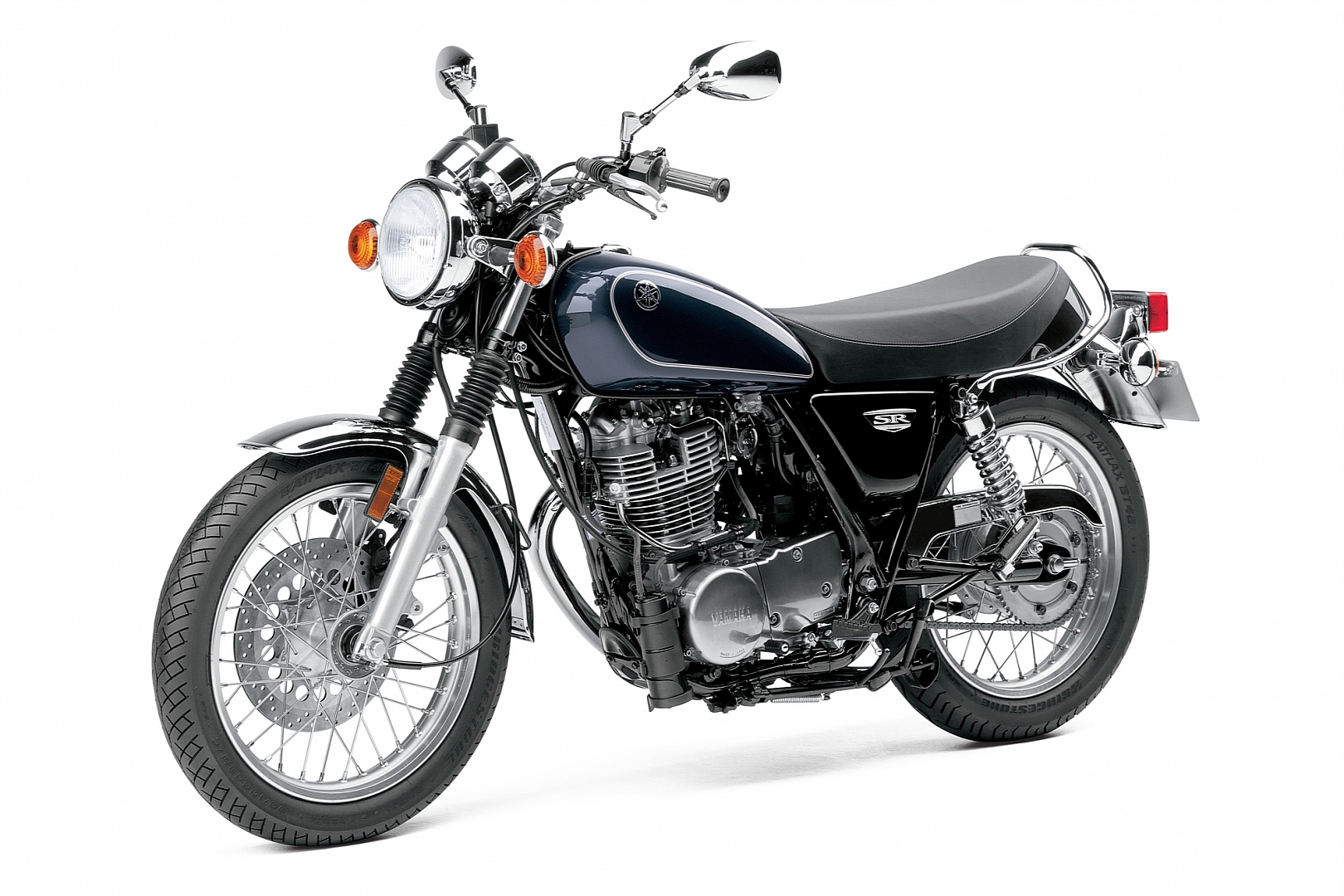 Laced wheels, chrome fenders, a one-piece two-up seat and plenty of classic accents make the 2015 Yamaha SR400 a bike with a very strong retro vibe. Finally, the thing few of you expected: the bike comes with kick-start only, so major retro credit is instantly earned. Add in the 66 mpg (3.55 l/100km) Yamaha claims and a price tag reading $5,990 (€4,290), and you’re in for a fancy ride.
3. Suzuki TU250X
The new TU250X is a last-minute entry on our list, as it has only been announced quite recently. Suzuki has also introduced this quarter-liter machine as an early-2015 model, and we guess it will make a lot of riders happy.

Truth is, the TU250X is more of a beginner bike, even though it’s been more than once when we saw riders choosing such bikes as a commuting alternative to their big-bore beasts. On the other hand, some would not enjoy the thought of being seen riding it, but the purpose of this piece is not to convince them how cool these bikes are, because we know they are, and that’s more than enough.

This bike is even cheaper than the new SR400, setting you back with $4,399 (€3,170), or even significantly less if you’re going for a second hand machine. The TU250X is light, tipping the scales at 148 kg (326 lbs) and this also makes it easy to master and reassuring for less experienced riders. It shows less chrome than the iconic SR400 and has painted fenders, but the flared exhaust and the knee pads on the tank are also strong retro badges. Single-rotor/ drum brakes and an old-school headlight with simple, single-gauge instrumentation are obviously on the menu.

All in all, the Suzuki TU250X can provide the rider with quite a lot of decent fun, but it lacks the longer range worthiness, and many riders looking for a retro bike to really travel on will definitely keep on looking. But for rides in the home area, this classic machine is really hard to beat especially when buying a previously owned one.
4. Honda CB1100
Some say that the new CB1100 and CB1100EX are a tribute to the initial CB750 of old, but in fact we’re looking at a natural form of evolution for Honda’s air-cooled retro machines. With Honda so deeply involved in spearheading technology advances, it’s really awesome to see the Japanese delivering such a bike intended for all the markets the Wing is present in.

The 2014 model also brings a huge improvement for the CB1100 range, a 6th gear. The initial model was clearly plagued by the rather restrictive transmission, but Honda fixed things with the addition of an overdrive 6th gear, allowing the 1142cc air- and oil-cooled in-line 4 engine to rev lower at high speed.

Honda is following the neo-retro recipe, and adds fuel injection, while ABS is offered as an option. Too bad that laced wheels are only offered as part of the deluxe package, but the multiple chromed out parts should make up for this. Retro looks are backed with top-notch engineering and the new CB1100 represents a very nifty balance between the two worlds. 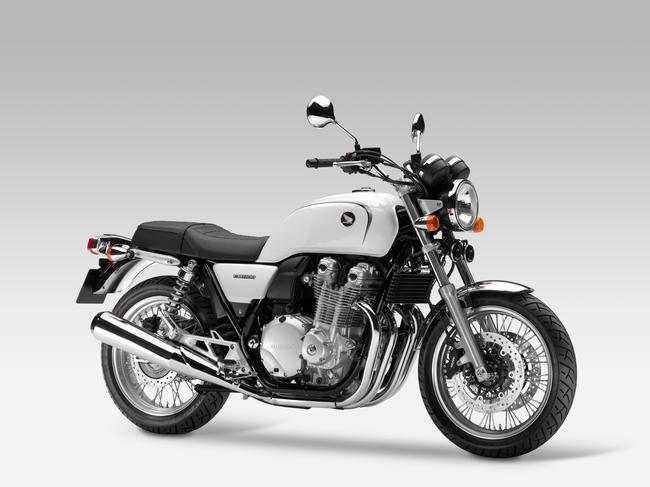 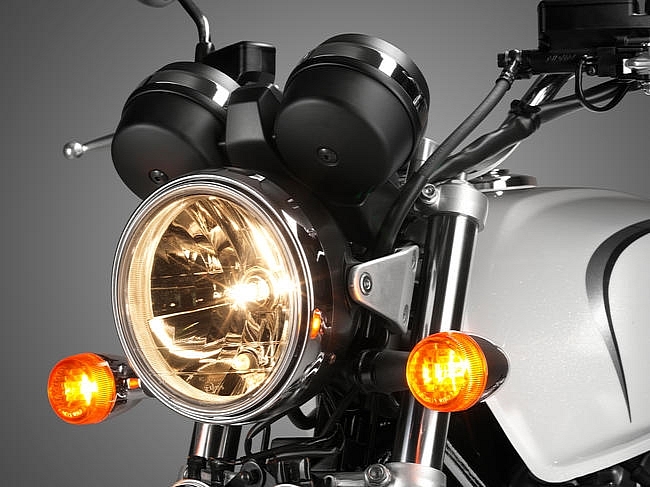 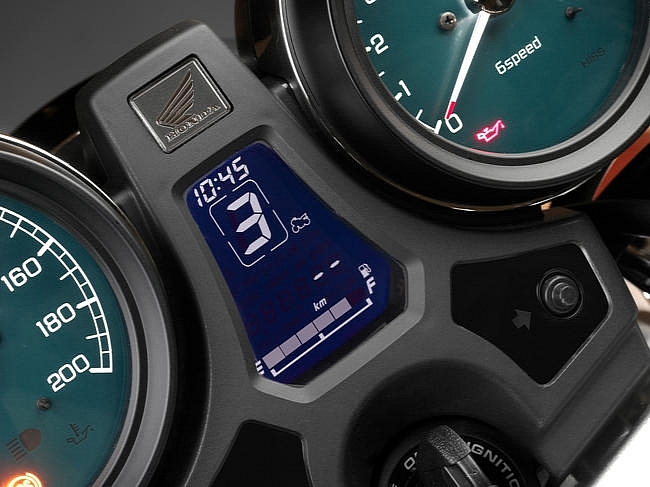 With US prices starting at $10,399 (€7,550), the Honda CB1100/1100EX is definitely one of the best choices around.
5. Moto Guzzi V7
Another triple treat comes from Mandello del Lario, Italy. Moto Guzzi never ceased being a milestone in retro-looking bikes and the constant upgrades of the V7 family are drawing a massive following.

Neo-retro bike aficionados can choose from the V7 Racer, V7 Special and the V7 Stone. Just like Triumph and Norton, we’re looking at a single platform, cleverly updated and modified so that three individual machines could emerge from it. Only a guy who knows nothing about motorcycles could mistake the longitudinal crankshaft v-twin lump for anything else than a Guzzi, and these bikes are proudly displaying their engines.

From the casual-looking Stone, to the polished aluminum shine of the Racer and the iconic racing stripe of the Special, Moto Guzzi’s new V7 machines are a classic, head-turning appearance. Ride one in the middle of a superbike group and you’ll see envy in the others’ eyes. The impeccable design harks back to the 70’s and the Racer even comes with a genuine leather strap for an even more authentic attire and it’s really hard to find such details in stock trim bikes. 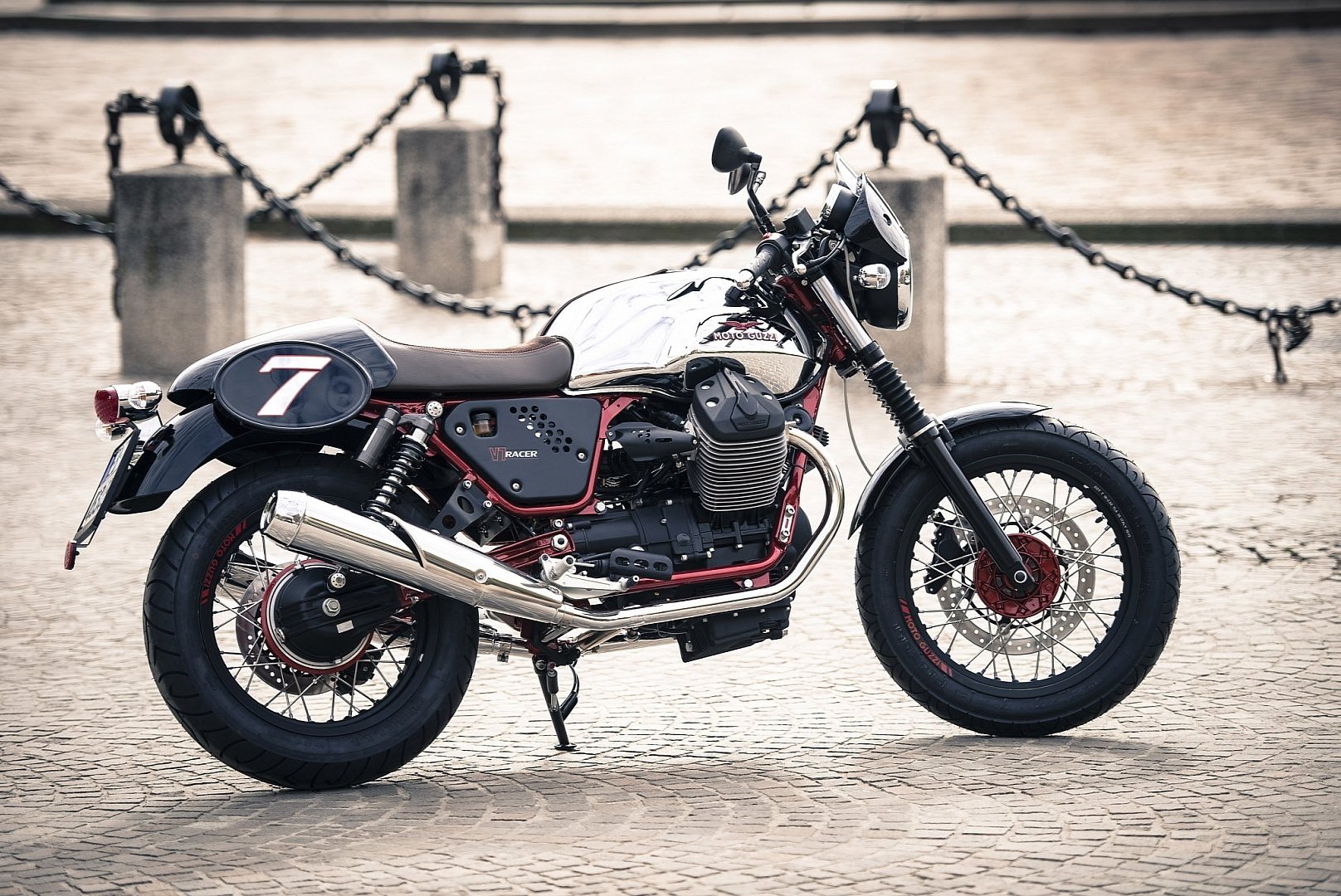 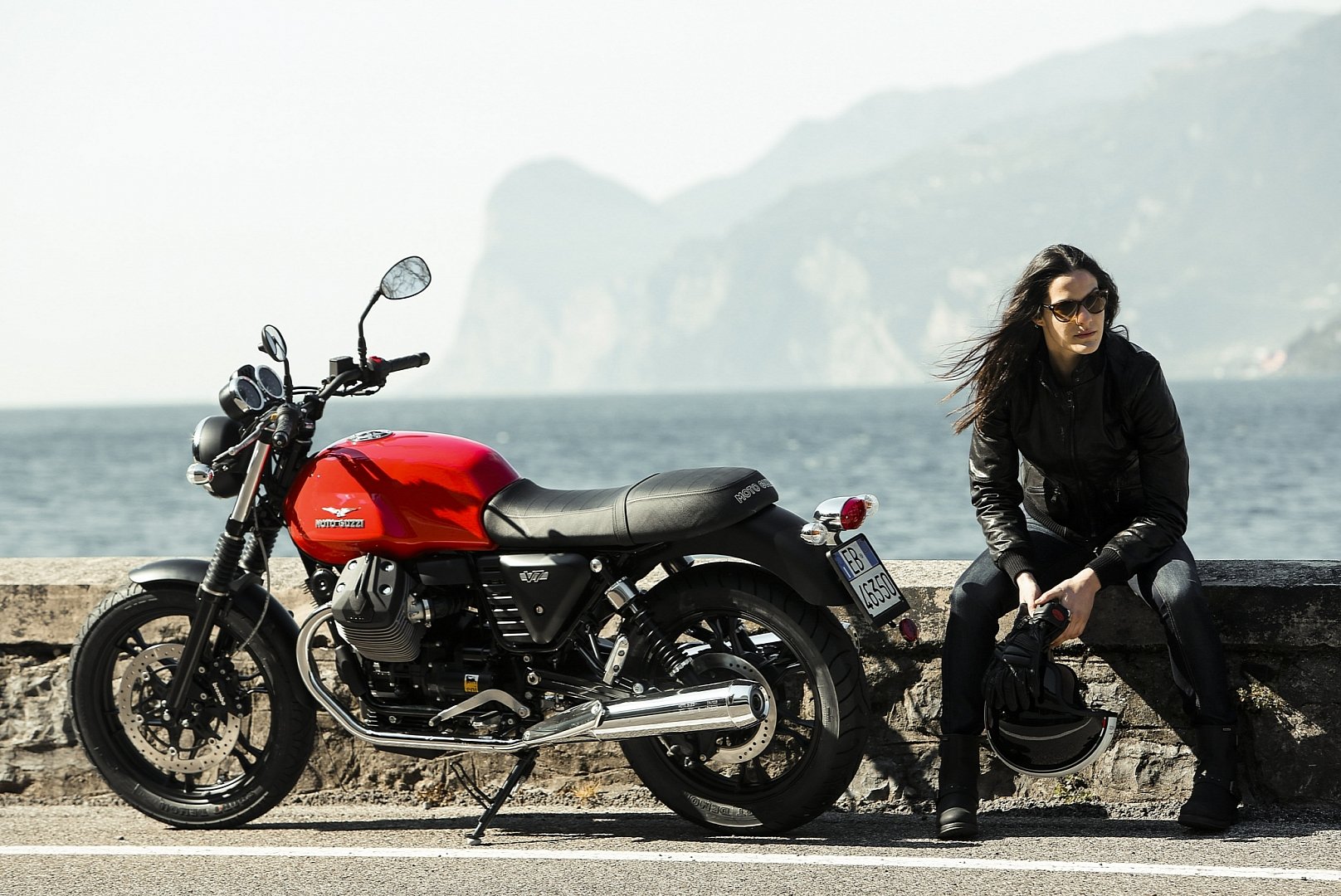 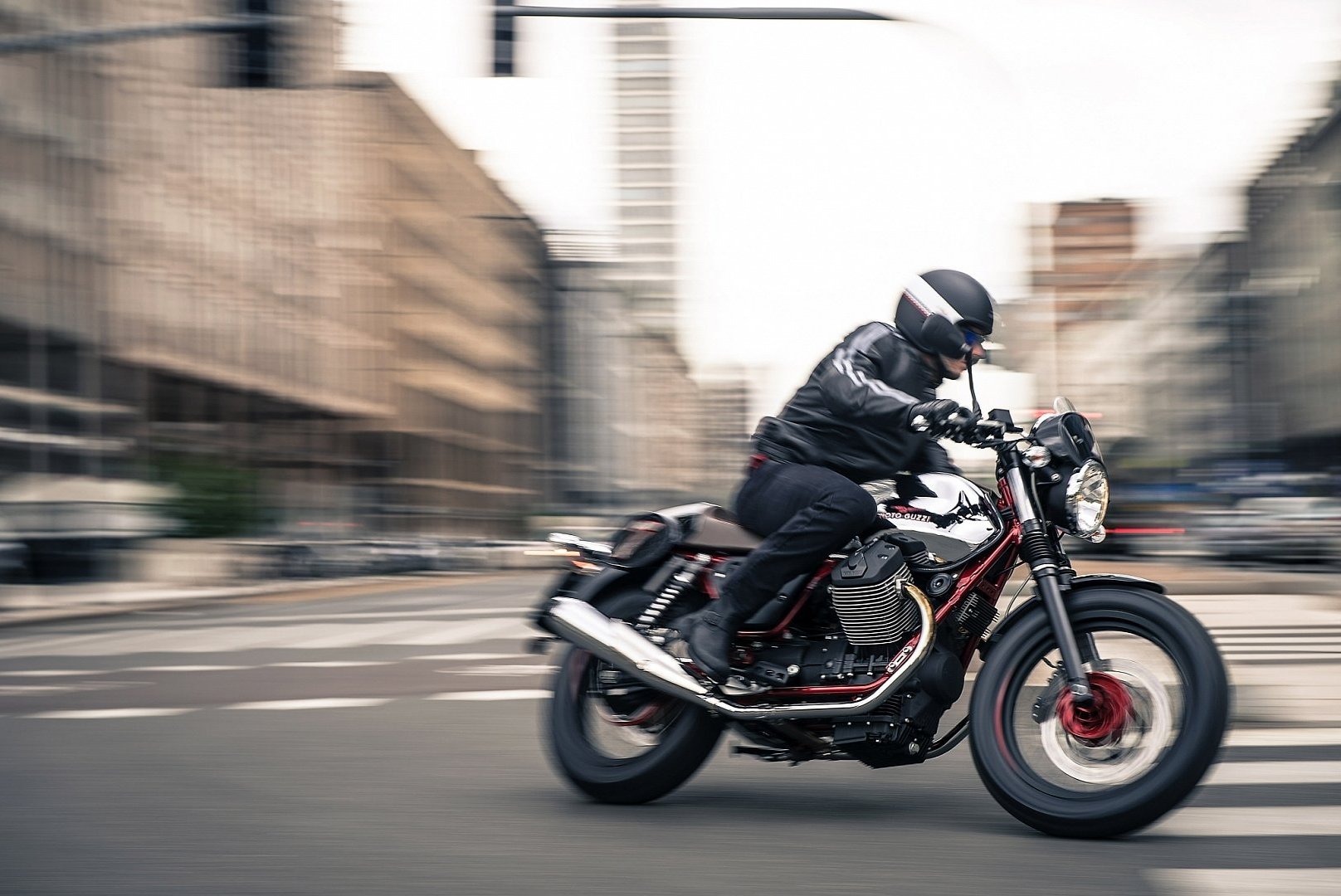 Choosing a Moto Guzzi V7 machine puts you in control of a 50hp, 58 Nm (42.7 lb-ft) injected bike with a 22-liter (5.8 US gal) tank. While the power is not mind-blowing, as some might complain, we remind you that the ‘60s and the ‘70s you’re about to (partially) relive were not about 200+ hp turbo bikes. The V7 is all about retro styling, solid comfort and a more reliable ride. With prices starting as low as $9,000 (€6,490), these Moto Guzzi machines are obviously selling quite well.
6. Kawasaki W800
Three trims for the new Kawasaki W800? We were all expecting this: standard, Café Style and Special Edition flavors are up for grabs in Europe. Dual rear shocks, plenty of chrome, laced wheels, as few plastic parts as possible and plenty of ‘70s glory, the new W800 has them, but there’s so much more to this bike…

Fork gaiters are once more fashionable, and even the new Harley Street 500 and 750 bikes use them. A generous ribbed two-up one-piece seat is always a cool retro feature, and Kawasaki knows this only too well. Knee pads are also standard, and a great complement to the dual peashooter exhaust.

Special Edition and Café Style bring in the iconic rear hump, matte black liveries and blackened engines, a retro fairing and multiple other styling elements, which add solid head-turning factor to the ride. 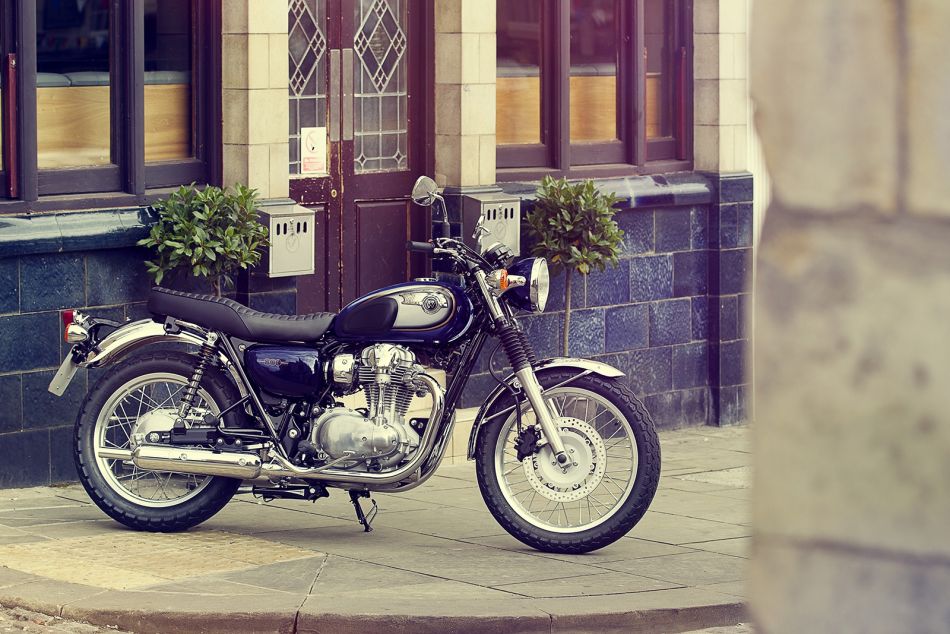 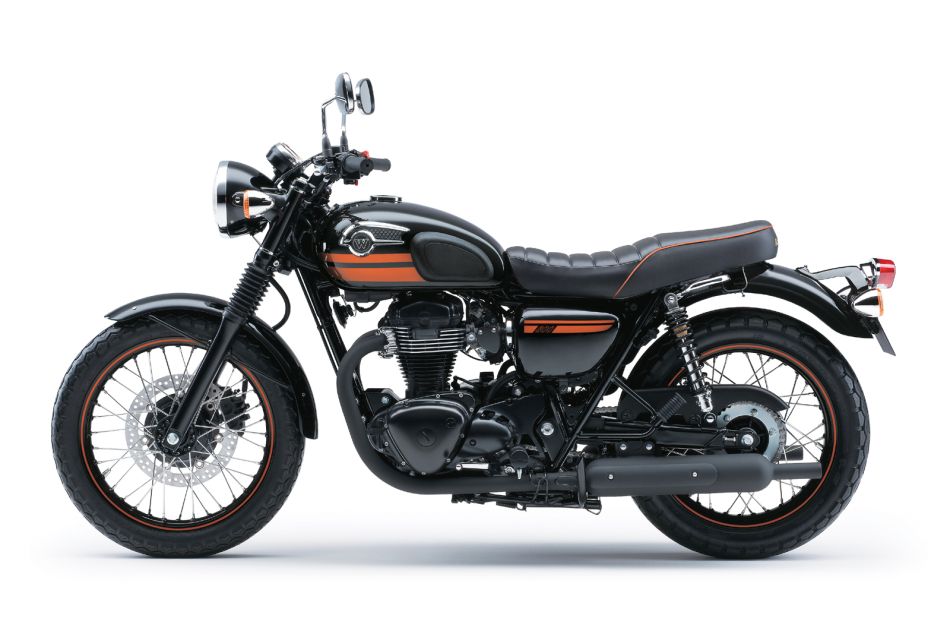 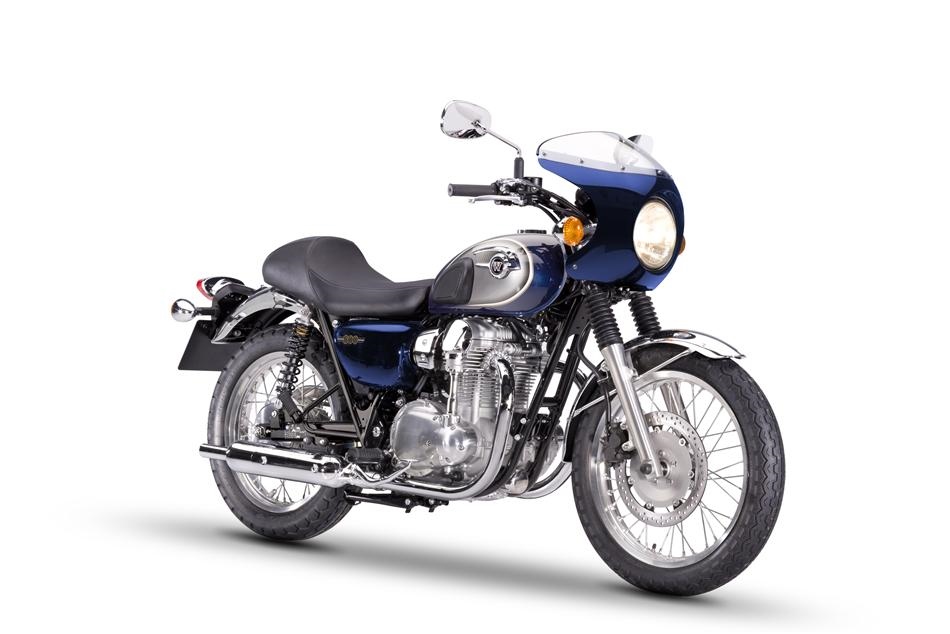 On the tech side, the new Kawasaki W800 puts 48 horsepower at your disposal, with 60 Nm (44 lb-ft) of torque at surprisingly low rpm (2,500), all from a parallel-twin 773cc engine. Air-cooled injected engine, that is. Old-school looks are matched with modern feats such as the dual throttle valves too.