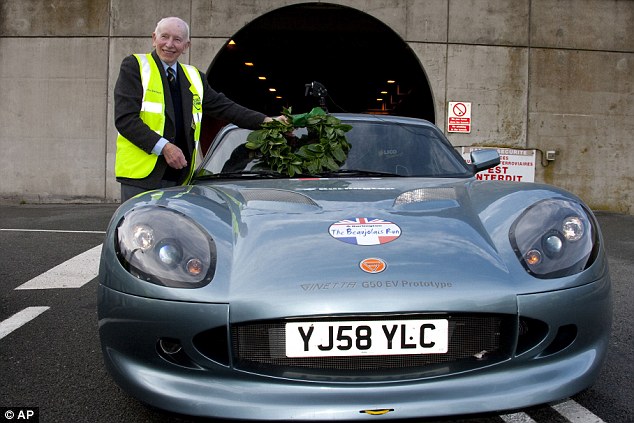 Former Formula One racing star John Surtees was the first person to drive a sports car along the Channel Tunnel, which was opened for the first time to mark Eurotunnel's 15th anniversary. The car was, in fact, a Ginetta G50EV electric sports car prototype, and was driven at speeds below 50kph (31mph) during the stunt.

Surtees, the only person to have won World Championships on both two and four wheels, said that "speed was the last thing involved" in his drive through the Channel Tunnel. "It was a casual drive, shall we say,'' he was quoted as saying by telegraph.co.uk.

The event also formed part of the 37th annual Burlington Beaujolais Run, which has raised £400,000 so far this year for the Richard Burns Foundation, set up in memory of world famous British rally driver who died of cancer, as well as for children’s cancer charity CLIC Sargent.

While Surtees drove through the tunnel, 35 fuel-powered sports and classic cars taking part in the rally travelled to France in the Eurotunnel Passenger Shuttle.

''It was the first time for me, and the first time it's actually been carried out. To come through in an electric car was another first,” said Surtees.

Asked what driving through a 31-mile long tunnel was like, he said: ''You certainly wouldn't want to be subject to any claustrophobic feelings down there. The tunnel is very small in parts but it's amazing what a tremendous engineering feat it is. It's quite staggering. The important thing, however, is all the money it's raised for charity.''