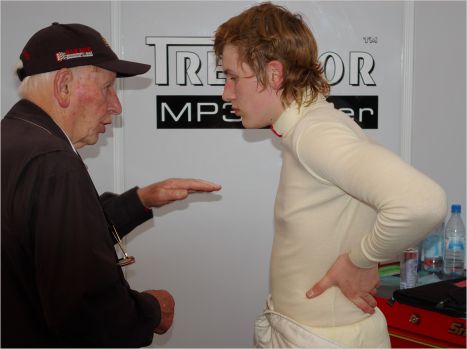 It has become a habit for former F1 drivers to guide their sons on their way to making the roster in the Great Circle themselves. And Henry Surtees joining the F1 pack of drivers for the 2009 season is proof enough that this rule still stands. John Surtees, the British driver who became the only man to clinch the world championship in both 2- and 4-wheelers (FIM 500cc and Formula 1), will see his son debuting in the F2 Series in only his 3rd year in single-seater competitions.

“I think it is fantastic. I won my last race in Formula Two and we are using the same colors on Henry's car as I did back in 1972 and 1973. Henry has been progressing well, and in this day and age, we need to give talented kids a greater opportunity to show off their skills - F2 is an international series that does exactly that. It may not have been around for 25 years but we needed to bring back some simplicity into the racing ladder - Formula Two has a great past but now it is a new championship for today!” said John, also manager of his son, when hearing the news.

Son Henry was no less enthusiastic about the news. Making his debut into single-seaters in 2007, 18-year old Surtees ranked an impressive 6th place in the highly competitive Formula BMW UK Championship. A year later, he joined the Formula Renault UK Championship and managed to finish runner-up in the Winter Series, while also winning one race and making one podium appearance in two British Formula 3 National class starts.

“F2 is a great opportunity for me. It is true that times are difficult for drivers to find sponsorship, so the concept of F2 has come at the right time. Lots of talented drivers are interested so it is going to be a tough year but such great competition is exactly what I am looking for. I am really excited about 2009 and now I just cannot wait to see the car!” said Henry.

The announcement came only days after Alex Brundle – son of former F1 driver Martin – will also be making his debut in the inaugural F1 series this year.