1 Own the Last Car Steve McQueen Drove: His 1952 Chevrolet 3800 Pickup With Camper

The King of Cool Steve McQueen was more than just a Hollywood actor: he was a highly-relatable figure, a racer, a car collector, and many other things the world never got to find out about. Today, his last car ever and the last one he ever drove, is up for auction again.
16 photos

Among other cars, Steve McQueen owned a 1952 Chevrolet 3800 truck with a custom-built camper. He bought it in the ‘70s off the side of the road, in what you could describe as a typical “seen it, loved it, bought it” kind of story, and would use it on what would be his final drive – to the airport, to fly into Mexico for cancer treatment in 1980.

McQueen bought this truck as is, with the 1952 custom camper called “Dust Tite.” He loved and, as such, he would often hit the road in it, which is what he should have done either way, since the camper has a still-comfy-looking bed in the back.

In May this year, Legendary Motorcar Company from Ontario, Canada, listed the Chevy camper for sale, with an “inquire for price” note. Today, the same camper is being offered at auction on Bring A Trailer, with only some hours to go into the auction as of the time of press. Bidding sits at $68,500.

This time, though, the lucky owner who nabs it will get a bonus: a 1972 Husqvarna CR250 that’s been modified to resemble the bikes in the film On Any Sunday, a 1971 film about motorcycle racing that also featured McQueen. It’s seen better days, but it’s still a good incentive for a potential buyer.

Not that the truck needs it, since it’s in incredible condition. With under 39,000 miles (62,764 km) on the odo, both the cabin in Forest Green and the metal camper are in top shape. The truck is powered by a 235ci straight-six engine mated to a four-speed manual transmission, and comes with such amenities as radio FM, heater and wing windows. The cabin is done in an interesting combination of green and brown, while the interior of the camper is also green.

Inside the camper, there are a double bed, drawers and shelves, and not really too much space to move around, but that’s the sacrifice you make for getting a vintage product. There’s a wooden roof platform and a diamond-plated rear bumper, three gas cans, a driver-side spotlight and two lockable toolboxes.

The camper truck sells with a certificate of authenticity from the Steve McQueen Estate, an auction catalog, California historical vehicle plates and California registration documents in his name. The three pink slips in McQueen’s name included in the offer back in May are no longer available. 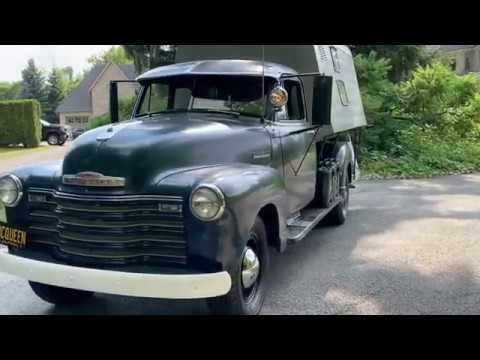