2 SpaceShipTwo, Zefram Cochrane Would Be Proud
Car video reviews:
Up Next 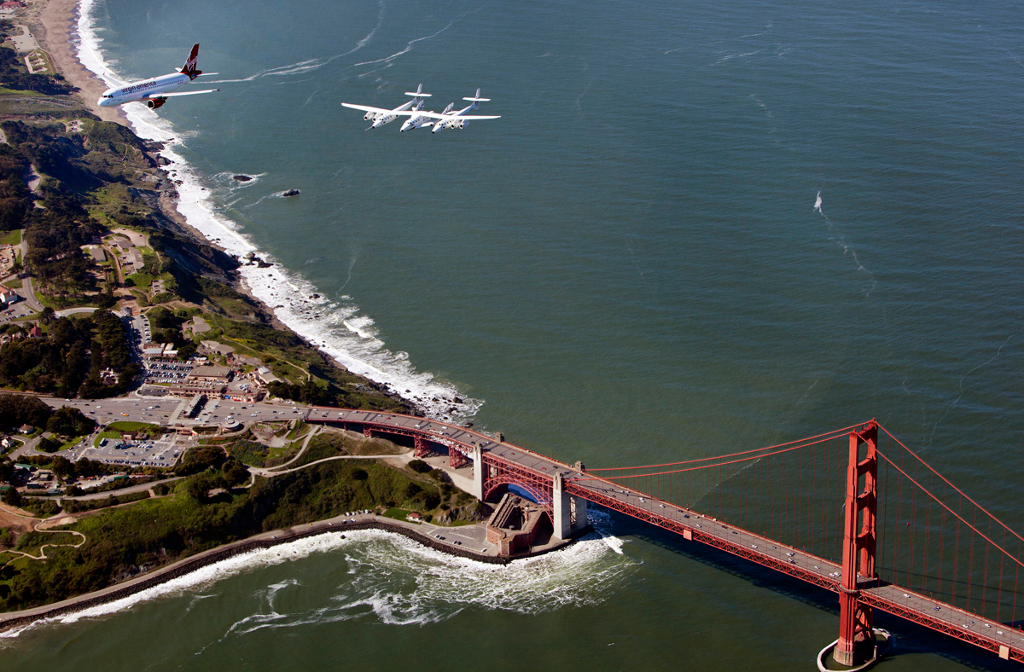 Seen from below and from afar, it looks like the bodies of three different planes linked together by one humongous wing. Seen from inside the Virgin group of companies, the craft, called WhiteKnightTwo, represents the future. And a very powerful marketing tool as well.

On April 6, the residents of San Francisco had the chance to experience a spectacle not many mortals have the chance to experience: two Virgins, one Galactic and the other America, flew over the city, on their way to the San Francisco International Airport (SFO), where they were expected to take part in the inauguration ceremony of the new terminal of Virgin America. On its way, WhiteKnightTwo, carrying the space craft SpaceShipTwo, flew right over the Golden Gate Bridge.

"Virgin America has the most advanced and carbon-efficient commercial fleet in the U.S. and when it touches down today at its new home it will share the runway with the future of commercial aerospace - SpaceShipTwo and WhiteKnightTwo," said George Whitesides, Virgin Galactic CEO,.

"We’re proud that two Virgin-branded companies can link the cutting-edge present to the future of commercial aviation. It is also fitting that today’s flights are helping to inspire the next generation of scientists, engineers and aviators."

SpaceShipTwo is a spacecraft which launches horizontally underbelly of the WhiteKnightTwo. SpaceShipTwo is powered by a hybrid rocket motor which uses solid fuel (rubber compound) and liquid oxidizer (Nitrous Oxide), a solution which is said to be better then standalone liquid engines or solid motors.

It will be used to turn commercial and civilian space flight a reality in the near future. (Full details on the SpaceShipTwo and WhiteKnightTwo can be found at the following link).