4 When The Chemical Brothers Share Your In Car Entertainment “System”

5 Comedian Kevin Hart Is Probably the Coolest Ex, Buys Cadillac for Baby Mama
Up Next

Valentino Rossi: I Want the Title, Linda and a Son

Ionut Ungureanu
They still have rickshaws in Asia and nobody seems to mind people using their own strength to pull customers around the city. Yet seeing people acting like mules on the streets might be a bit to medieval to our taste. Sure, it didn’t seem to bother these ladies who were carried around by masked wrestlers. Come to think about it, the gym-shaped human-piggyback taxis didn’t mind it even.
7 photos

If it wasn’t a chocolate commercial we almost would have assumed we’re somewhere in Amsterdam. Hey, blame us for having dirty minds, but this scene sure does resemble to some stripper shows they throw at bachelorettes parties. Yet, it has nothing to do with that.

The masked wrestlers were in fact hired by South African Zang Chocolate as part of their peculiar promotional campaign. These people were in fact carrying around passengers from bars and galleries in place of vehicles. The retailer was bringing their new chocolate bars to customers and since their product is supposed to be some sort of an energizer sweets, you get the drill.

To launch their pick-me-up product, which is what the combination between caffeine and chocolate is intended for, ZANG created a campaign to translate energy-boosting features into a physical experience for consumers, thus the piggyback taxi service. Like we said, it appears that rather than calling for an Uber driver to pick them up, the chocolate eating ladies didn’t seem to mind the beefy men holding them.

The participants were simply asked to tweet for a #ZANGLIFT at @ZangChocolate to hail a ride from various locations and the luchadores would come to the rescue.

According to their website, each ZANG chocolate bar gives the same pick-me-up as a cup of coffee or a 250ml energy drink, so now here we are wondering how many chocolate bars do we need so women would actually allow us to carry them around... 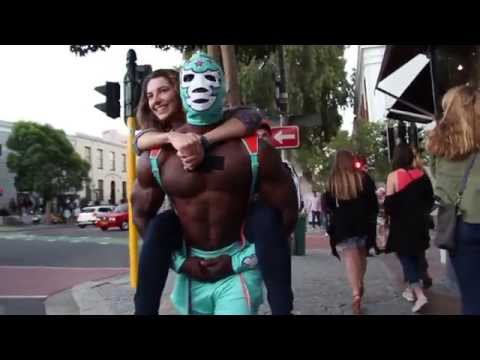