5 Spoiled Kid Drives a Ferrari
Car video reviews:
Up Next

Seven-Year-Old Daniel Goes for a Joyride in His Mom's Kia, Mayhem Ensues

Kids do funny things, but taking their parents’ car for a ride when they’re only seven is not something you see very often. A young boy from Middletown, Ohio, did just that when he wanted a morning slushie, causing chaos in his path. Luckily, no one was hurt.
8 photos

When you’re seven and crave a morning slushie, you try your best to get to that slushie, even if your parents are asleep. Seeing this done many times, Daniel thought it was only natural to take the car and be on his way, just like any sane man would do. It wasn’t easy, as the keys were out of reach, and the poor boy had to use a chair to get them. But in the end, Daniel got behind the wheel of his family’s Kia Sportage, and off he went.

The dashcam video shows the young boy buckling the seatbelt as any responsible adult would do and going about his business. Of course, he made some rookie mistakes, not knowing anything about road rules and very little about driving a car. The fact that he could barely reach the pedals and keep his head above the dashboard at the same time did not help either. Soon, he got in the wrong direction on a four-lane road, causing chaos.

The 911 calls started to pour in as fellow drivers could not believe their eyes, and some of them even jumped out of their cars and tried to stop the moving Kia. A man attempted to break the car’s window to achieve this, to which Daniel is heard saying, “Stop! It’s my mom’s car.” Then a braver man appeared in his path, trying to stop the Kia with his body. Daniel tried his best to avoid him but hit a parked Jeep while doing so, ending his first, probably costly, driving lesson.

Fortunately, no one was hurt during this misadventure, except the two vehicles and Daniel’s parents’ pride. And budget. And probably more if the authorities decide to investigate the parents further. The key takeaway here (pun not intended) is not to let your car’s key where your children can get to it. However difficult you might think it is, kids these days are incredibly resourceful. 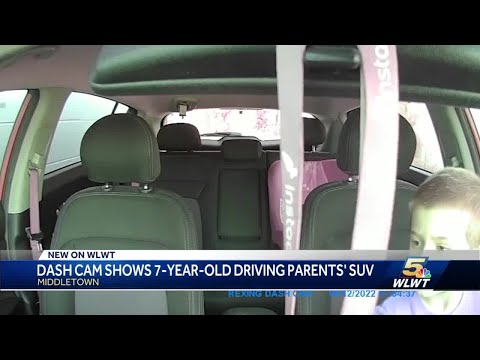