5 12-Year-Old Boy Flees From Police, Crashes Into Another Car And A Pole
Coverstory

Home > News > U-turn
Vlad Mitrache
It's stories like these that help turn normal parents into over-protective freaks that won't let their kids move a hair without written permission from them.
1 photo
And it's easy to understand and empathize with them because the last thing you want is your child stealing the keys to your car and going on a joyride that could end in so many ways other than them returning safely home.

So what can you do? Keep the car keys in a safe? Lock the kids in their rooms? Obviously, the right answer here is to give them a good education, have an open relationship with them and make sure they trust you unconditionally and you do the same.

But that's the kind of thing you read in pretentious parenting books; life, on the other hand, has a certain way of making things a lot more complicated which is why we should never assume we know more about a certain situation than we really do.

Here's what we do know. It would appear the 10-year-old stole the silver Infiniti belonging to his mother's boyfriend at around 8:30 in the morning while he was waiting for his sister to pick him up for school. When the adults realized what had happened, the mother chased after him while her boyfriend called the police.

The mother-and-son pair blasted on the highway occasionally reaching speeds of over 100 mph (160 km/h), but she failed to convince him to stop. The police didn't have much more success initially as the kid managed to duck the spike strips, prolonging the chase. He was able to cover 45 miles before the troopers eventually managed to block his vehicle and arrest him.

Turns out taking him into custody wasn't the piece of cake you would expect given his young age. Cleveland.com reports the little boy refused to come out, struggled, kicked the officers and spit on them before they managed to drag him out of a window.

He has now been charged with felony fleeing and eluding and it is being discussed whether he should remain in a juvenile detention center. Cleveland police revealed it was the second time in two weeks that the kid had taken one of the family cars for a joyride. So it might be the mother's fault after all. 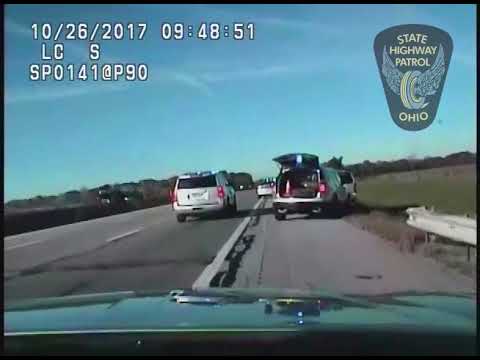