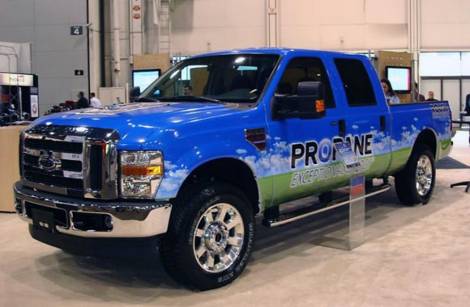 The efforts made by American manufacturer Roush to implement propane as a means of propulsion for Ford pick-up trucks have been recognized by the California Air Resources Board (CARB), who granted both the F250 & 350 modified by Roush the coveted certification approval. Simply put, this means the two pickups will be able to get sold in all 50 states, as they meet the required emission standards.

“We have made a significant investment in our liquid-propane injection technology, and we look forward to helping fleet operators across the country reduce their carbon footprint and operating costs with our propane-powered vehicles," Todd Mouw, director of sales and marketing for ROUSH Propane Vehicles said in a statement.

"We have more than two hundred 2010 Ford F-250s and F-350s in our inventory, so we have plenty of trucks available to meet customer demand.”

Following the introduction of the first propane powered Ford F-250 in early 2009, Roush Performance announced towards the end of the year the introduction of a new line of propane-powered vehicles. The manufacturer will introduce such a system on the E-Series line of vans and will be offering propane-fueled E-150, E-250 and E-350 starting with the first quarter of 2010,

The advantages of using propane instead of other alternative fuels weight quite heavily in favor of Roush's approach. According to the builder, propane emits up to 20 percent less nitrogen oxide, up to 60 percent less carbon monoxide and fewer particulate emissions. Following gasoline and diesel, propane is currently the third most used fuel in the world.

For the US, using propane is even more convenient, as up to 90 percent of it is being produced locally. In addition, propane-powered vehicles are also subject to a wide range of government and state incentives.