Home > News > U-turn
Vlad Mitrache
The simple idea of targeting a Rolls-Royce at millennials seems preposterous, and that's because the only way they could afford it was if they came up with a very popular app or had very rich parents.
8 photos

Either way, the percentage of Generation Y members that fall into these two categories must be really low. And to make matters worse, Rolls-Royce isn't the only ultra-luxury brand out there, so there's competition to think about as well.

Perhaps that's precisely the reasoning behind the Black Badge Ghost model: setting the limousine apart from the rest to maximize the chances of being picked up by this very limited pool of customers. Or maybe they just wanted to make a car with a neon blue interior, who knows?

Either way, Rolls-Royce suggests it is created specifically for millennials, even though the German-owned British company uses a lot more pompous words to describe the category. Words such as "risk takers," "disruptors," as well as adjectives like "elusive" or "defiant." And that's just from one paragraph of the press release.

Clearly, the person reviewing the car isn't part of the target group. He may fit the age profile, but the person described by Rolls-Royce in its text would not wonder at a $1,400 lamb-wool floor mat. Nor would they film their bare feet rubbing against it, though that would have deprived this presentation of one of its most humorous parts. But don't worry, there are plenty of those.

Like any self-respecting Rolls-Royce review, this one focuses on the car's features and its rear seat amenities. After all, a Rolls isn't a car you should buy to drive, but be driven in. However, on the odd day when Johan, your driver, calls in sick and your supercar is at the car spa getting its nails done or something, you'll have to get behind the wheel of the Ghost Black Badge yourself.

Well, Jason Fenske at Engineering Explained has you covered. The 6.6-liter twin-turbo V12 engine develops 603 hp and 620 lb-ft (840 Nm) of torque, which is another way of saying "plenty." The Rolls will go fast, but the roughly 5,500 lbs and the numb steering mean it will only do so in a straight line. Besides, it's hard watching the stock market on those chrome-beveled displays in the back if you keep moving from side to side, so tap Johan on the shoulder and tell him to keep it down if he gets carried away.

You're probably not in the market for a Rolls-Royce, but that doesn't mean you shouldn't treat yourself to a nice review of a special model devised for the "young gentlemen in a hurry, driven by their restless spirits to change the world in their own way." Wow, Jason might have been right about his lunch. 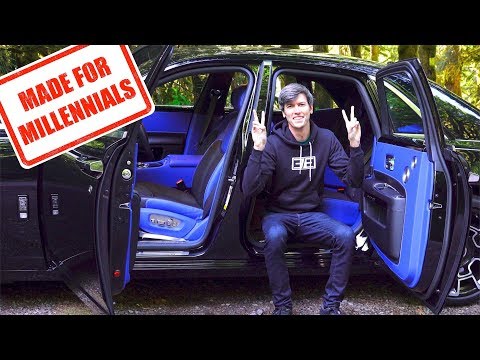