3 BMW M4 Can Now be Fitted with a Remus Exhaust

Gabriel Nica
We recently took a base MINI Cooper out for a test and came up with some rather interesting conclusions. One of them is that the stock exhaust is nowhere near what it's supposed to be.
1 photo
That's probably the biggest problem the MINI Cooper hardtop model has to be honest. The 3-cylinder 1.5-liter turbocharged engine delivers tons of torque and power from down low and driving it is an absolute joy.

For any up and coming, regular driver out there the MINI Cooper will be enough for their daily dosage of adrenaline kicks. It's small, light on its feet and funky, but it would be absolutely brilliant if the engine were a bit louder.

Inside the cabin, the sound insulation works so well, you hardly get to hear it at all. Only in Sport mode and at over 4,500 RPM it makes itself heard with the windows up. By then wind noise will come in and make things as awkward and loud as possible too.

The guys from Remus have apparently solved this issue. They just launched a custom exhaust for the Cooper and it's a godsend piece of kit, to be honest, transforming the car and the way it sounds, making it a complete package.

According to them, the system you hear in the video below is homologated and includes a front silencer and pipes but it doesn't include the tailpipes you see. They are sold separately and can be had in various guises.

Adding the Remus cat-back sport exhaust to your MINI will not only change its sound but also drop some weight. Don't expect big changes though, we're talking about less than a kilo.

The price for the complete package is €756 without VAT. Chip in some tailpipes that go from €80 to €185 and you're looking at under €1,000 for a custom exhaust that actually sounds good. 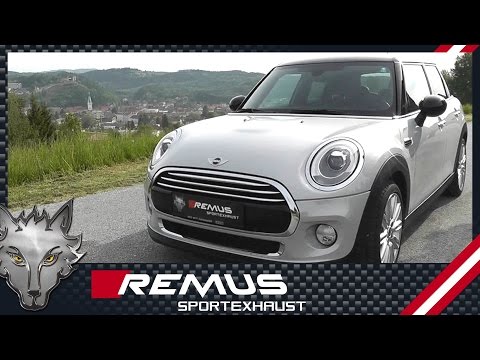