A lot of strange machines came out of the Soviet Union back in the days. Starting with the WW II Katiusha rocket launcher truck to jet-powered trains, but no one could beat this uber-cool Tupolev A-3 Aerosledge here which can be yours for a quarter million.
6 photos

Why would you spend $250,000 on a plane looking thing that can only slide around? The seller claims there are only two of them in the USA. The thing has been completely restored and previously sold at Barret Jackson 8 years ago for $187,000 and it’s now back on sale.

Built in Ukraine between 1964 through the early 80s, the Tupolev A-3 “Hope” (as it was originally known) was designed to carry mail, passengers and light freight in remote snowy areas in Siberia although some believe it was originally designated to recover cosmonauts landing in the frozen area.Built for the arctic tundra
The Tupolev A-3’s body looks to be the incarnation of a speedboat mated with a light airplane. The body and the vehicle’s structure are made of Duralumin, which is an alloy of aluminum, copper, magnesium and manganese, to cope with water and ice sliding.

Power comes from a 260 hp radial engine turning a single-shaft twin blade system at the rear, but for the fun of it, this unit here (chassis N007) has a supercharged nine-cylinder Vedeneyev M14P which adds 100 hp more.

The cockpit is accessed through some big gullwing doors, has four leather seats and the control system is pretty similar to what you find on an aircraft. 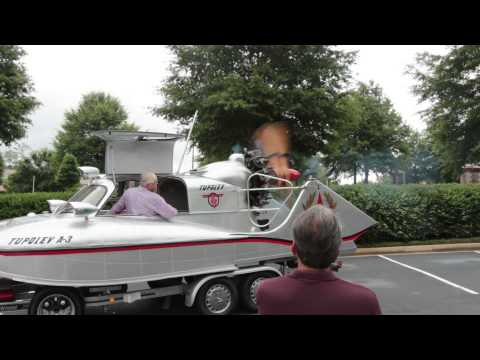