5 Robots Of The Future Are Origami-style and Able To Self Assemble
Car video reviews:
Up Next

It took three days for the five-meter freestanding structure to unfold in the ancient water city of Suzhou. Land Rover has driven its flagship luxury SUV across the bridge in an event held ahead of the Guangzhou Motor Show in China.

Often nicknamed “Venice of the East,” Suzhou is famous for its bridges, but most likely something like this never happened before. The size of the structure is only surpassed by its construction, as not only was it built by hand, but there was no glue used whatsoever. The unique crossing was made of high-quality paper supplied by specialist British manufacturer James Cropper PLC.

With the stunt, Land Rover is not just celebrating a milestone in its existence in what today is the biggest car market on the planet but also wants to prove its abilities to innovate and break boundaries. The company claims that the Range Rover was the world’s first ever luxury SUV when it debuted in 1970 and was the first vehicle to drive across the Darien Gap in Central America two years later.

Moreover, in 1989 it was the first 4x4 to be fitted with ABS anti-lock brakes and introduced both Electronic Traction Control and electronic air suspension to the sector in 1992. The British carmaker also wants to point out that its latest fourth-generation SUV was the first all-aluminum 4x4 when it debuted in 2012. Its lightweight construction provides a total vehicle saving of up to 420 kg compared to using traditional steel.

With the unique structure, Land Rover Experience chief instructor Chris Zhou was entrusted with negotiating the paper bridge, using a variety of all-terrain technologies to preserve the fabric.

“Paper structures capable of supporting people have been built before but nothing on this scale has ever been attempted. It's pushing engineering boundaries, just like the Range Rover, and the ease and composure with which the vehicle negotiated the arch was genuinely breathtaking,” said artist and paper bridge designer Steve Messam. 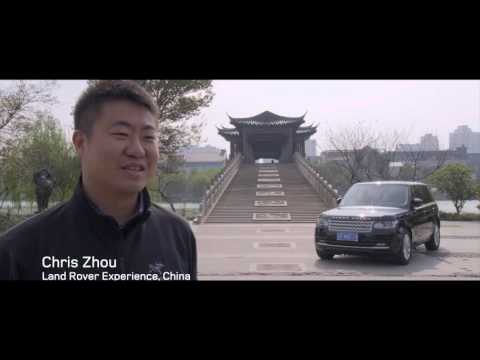