4 Mercedes-AMG GT Is a Slow Seller, Yet Customers in the US Complain About Availability

5 2017 Mercedes-AMG SL63 Spotted for the First Time, and on Halloween No Less
Space Junk

Vlad Mitrache
The Mercedes-Benz C63 AMG (W204) is still a tuners’ favorite, something we’ve all seen over the last few months since the new W205 generation was launched.
1 photo
This particular Mercedes-Benz C63 AMG here is modified by the guys at Prior Design, and bears the special moniker “Androsch Edition.” The car would actually look quite nice, but the truth is that the color scheme ruins everything.

While the black wheels and the silver paint work well together, the green bit looks out of place, making the Mercedes-Benz C63 AMG look like a German police car gone crazy. And those decals written in comic sans... those aren’t cool even on laundry vans.

But try to ignore the paint and those writings randomly spread over the car’s body, and you will actually see a mean looking C-Class ready for some business. And business it is, as it’s got some serious competition to fend off.

The stock W204 Mercedes-Benz C63 AMG comes with a 6.2-liter naturally aspirated V8 engine with a maximum power of 487 hp. Since it’s not a turbo, tuning the engine won’t be a simple case of remapping the software, instead requiring for somebody to get his hands dirty.

This seems to be a Prior Design field day, as the Mercedes-Benz C63 AMG isn’t the only car with this tuner’s stamp on it out there. In fact, it even goes against one of its stable mates in the last race, which is against a custom Ferrari 458 Italia.

Its previous competitors are not as glamorous, though. In the first race, it competes with an Audi RS3 (plenty of power, all-wheel-drive); the second one is with a Porsche 911 Turbo 997 (yeah, Porsches rarely lose), while the third and final opponent is the modified Ferrari supercar.

Well, there’s no nice way of putting it: the Mercedes-Benz C63 AMG gets it - you’ve probably got that from the title. But that doesn’t mean it’s not worth watching it give its best while sounding like a complete hooligan. 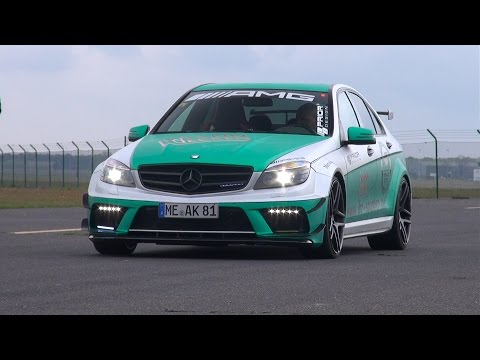