3 Police Seize Chinese Gold Car for Being... For Being. 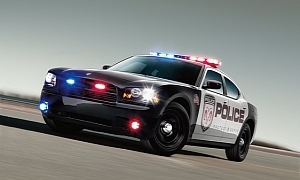 North Carolina will join Australia beginning December 1st in adopting laws on the book mandating the seizure of vehicles for certain speeding offenses. The “Run and Your’re Done” bill into law was signed by Governor Bev Perdue.The law authorizes a county sheriff to take and hold the car of anyone accused, not convicted, of speeding away from a police officer.

The measure passed through senate and the State House unanimously. The new law states that the confiscation of a vehicle becomes permanent if judge decides the car or motorcycle was used to escape from a police officer while speeding more than 15 mph over the limit with at least one aggravating factor, such as having someone under 12 years old in the vehicle or vehicle was at some point in a highway work zone, regardless of whether there were any workers in the area, as related by thetruthaboutcars.com

The new law states that the vehicle can be seized an sold even if the actual owner of the vehicle is unaware of its use for speeding. The procedure is very quick and simple. The police only needs to place a legal advert in a newspaper on two occasions and paste up three handbills near the place of seizure before selling the car. All this can be done in 24 hours.