1 Perseverance Rover Launches on July 30, Here’s How to Watch

3 NASA Goes All In for the Mars Rover Launch, Calls for Global Countdown

5 Chinese Are Going to Mars in Search of Heavenly Truth
Car video reviews:
Up Next

Perseverance’s Journey to Mars Begins with This Trip on Earth

At the beginning of July, NASA proudly announced the Perseverance Mars roves is nicely tucked inside the spacecraft that will take it to its place of work, millions of miles away. But before it got onto the launch pad at the Kennedy Space Center in Florida, it had to travel across the U.S on a journey that started in February.
19 photos

The rover was put together over the past few years at the Jet Propulsion Laboratory (JPL) in California, and a new video released by the American space agency shows how the rover’s journey to Mars began with a trip across a piece of the Earth.

In February, Perseverance was packed and hidden inside a big white reusable container that was guided by hand out the doors of the facility. It was then taken to the March Air Reserve Base, where it was uploaded into a military transport aircraft.

After arriving it Florida, it shipped to Kennedy by road, where it entered again NASA’s laboratories so that it could be paired with its lander and the spaceship that would take it to its destination. It then made its final trip on our planet to the launch pad, where it was raised at the top of the United Launch Alliance Atlas V booster.

NASA is for now targeting a July 30 launch for the rover. That is the first day in a two-weeks long launch window that would ensure the rover’s safe arrival at its destination.

Based on the same platform as the Curiosity rover, Perseverance is the size of an average car but has six wheels to help it navigate the tricky terrain of the Martian planes. It is powered by a thermoelectric generator that can turn heat generated by the natural decay of plutonium-238 into electricity.

There are seven instrument mounted on the rover, which will be used to perform an array of experiments, some of which never-before-attempted, such as oxygen generation and the collection and storage of soil samples that would later be sent back to Earth. 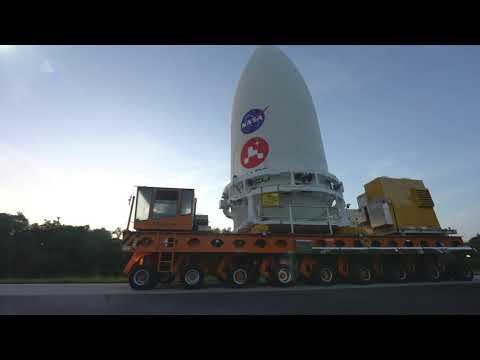