3 NASA Plans to Bring to Earth a Piece of Mars

4 NASA to Send Helicopter to Mars on 2020 Rover Mission

5 NASA’s Lunar Outpost Gateway to Start Construction in 2019
Car video reviews:
Up Next

One of the most ambitious space mission of the past decades is less than two years away. In the summer of 2020, NASA will be sending to Mars a brand new rover, tasked with a mission no other man-made machine ever had: prepare the way for the first arrival of humans on an alien planet and attempt the first ever small scale terraforming of the Red Planet.

UPDATE: In March 2020, the rover got its official name: Perseverance.

As it continues assembly at JPL’s Spacecraft Assembly Facility High Bay 1 in Pasadena. California, more and more details about the rover come to surface, piling up to create the full picture of one of the most impressive objects man ever made. Below you will find a more detailed look at the rover, its instruments, and its historic mission.

For now, the machine is simply called the Mars 2020 rover. It is based on the same platform as the Curiosity rover, developed by JPL’s Mars Science Laboratory, but a bit bigger. The rover is the size of an average car, measuring 10 feet long (3 meters), 9 feet wide (2.7 meters), and 7 feet tall (2.2 meters).

Mars 2020 has six wheels to help it navigate the tricky terrain of the Martian planes. Its body hides computers and other hardware needed for exploration. The temperature is regulated with the help of internal heaters and insulation.

Power for the rover will come from a Multi-Mission Radioisotope Thermoelectric Generator (MMRTG) similar to the one used on the Curiosity. It turns heat generated by the natural decay of plutonium-238 into electricity that will power all of the rover’s systems.

The Rover will be tasked with an array of missions never performed before. For this, it has to be equipped with state-of-the-art tools and instruments.

Seven such tools have been selected by NASA to be transported to the Red Planet. They were chosen from a proposed 58 instruments submitted by researchers and engineers worldwide, twice the usual number for instrument competitions. The seven are listed below.

The Mastcam-Z is a panoramic and stereoscopic camera which will be used to determine the mineralogy of the Martian surface and assist with rover operations.

SuperCam will be used to provide imaging, chemical composition analysis, and mineralogy. It has the capability to detect the presence of organic compounds from a distance.

PIXL (Planetary Instrument for X-ray Lithochemistry) is an X-ray fluorescence spectrometer that will be used to detect and analyze chemical elements.

SHERLOC (Scanning Habitable Environments with Raman & Luminescence for Organics and Chemicals) is the first UV Raman spectrometer to be sent to Mars, and it will be used to detect organic compounds.

MOXIE (Mars Oxygen ISRU Experiment) is perhaps the most exciting of them all, as it will be used to sort of start humanity’s terraforming efforts on Mars, albeit on a tiny scale: it will produce oxygen from Martian atmospheric carbon dioxide – Mars’ atmosphere is 96 percent carbon dioxide.

RIMFAX (Radar Imager for Mars' Subsurface Experiment) will provide centimeter-scale resolution of the geologic structure of the subsurface.

The Mars 2020 rover is the first to target long-term goals: it will look for signs of life, assess the habitability of the environment, track natural resources and hazards and even try to generate oxygen. Additionally, it will also pick-up and store rock samples in canisters placed in strategic areas, for a future mission to pick them up and bring them to Earth. This strategy is called by NASA depot caching.

Before getting to all that, the Rover will, however, have to reach Mars. It will depart Earth sometime in July or August 2020, when our planet is at its closest to Mars. Following a few months of travel, it will arrive on site in February 2021.

For landing, the Rover will use a parachute, a descent vehicle, and an approach maneuver called skycrane. This technique was pioneered on the Curiosity as a means to land heavier machines without having to use airbags to soften the landing.

It works like this: after the vehicle travels at a slow enough speed thanks to the parachute, the heatshield detaches, and the descent stage is separated from the backshell.

Using four steerable engines, the descent stage slows the rover further. When nearly zero velocity is achieved, the rover is released from the descent stage, tied to a bridle and umbilical cord that are used to lower it to the ground.

The rover’s landing site has not been selected, as NASA still looks at three possible choices: Columbia Hills inside Gusev crater, Jezero Crater, and NE Syrtis. 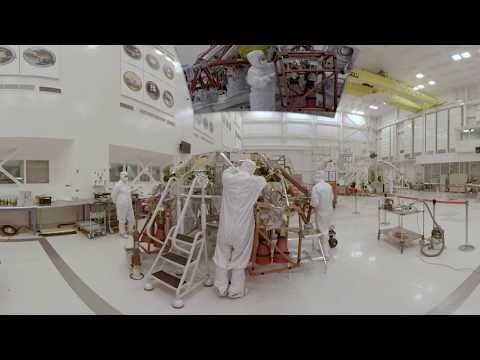